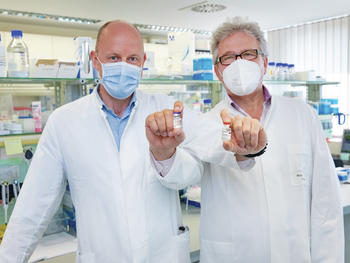 Professor Behrens (left) and Professor Förster in the MHH Institute of Immunology with vaccine vials of the companies AstraZeneca and Biontech/Pfizer held crosswise.

The Standing Committee on Vaccination (STIKO) supports a second vaccination with an mRNA vaccine such as the one from Biontech/Pfizer for people under 60 who have already received an AstraZeneca vaccination – based on risk-benefit considerations. This recommendation is based on various research papers that were in preliminary stages of publication in scientific journals. Now the results of a study at the Hannover Medical School (MHH) by Professor Dr Reinhold Förster, head of the Institute of Immunology, and Professor Dr Georg Behrens, Clinic for Rheumatology and Immunology, were published in the journal Nature Medicine. The study has now shown that such a cross-vaccination is more effective against SARS-CoV-2 infections than the double vaccination with the AstraZeneca vaccine. In addition, it is more effective against virus variants. The study was supported within the framework of the German Center for Infection Research (DZIF) and financially supported by the Cluster of Excellence RESIST, the State of Lower Saxony, the Federal Ministry of Education and Research (BMBF) and Collaborative Research Centre 900.

"The second vaccinations with the Biontech/Pfizer vaccine led to significantly stronger immune responses than the second vaccinations with the AstraZeneca vaccine," reports Professor Förster: "After the cross-vaccination, there was an 11.5-fold increase in certain protective antibodies (anti-S IgG), whereas the AstraZeneca vaccination alone led to about a three-fold increase. There were similar changes in other antibodies (anti-S-IgA) and in T cells. The quality of antibodies and T cells was also higher after cross-vaccination. Antibodies keep the virus from entering the cells. T cells destroy infected cells and trigger further immune reactions. "The overall effect of the cross-vaccination was similar to that of people fully vaccinated with the Biontech/Pfizer vaccine," says Professor Behrens. However, he adds, the immune response is already at a very high level even with AstraZeneca vaccination alone, and the vaccine remains very important in the fight against COVID-19.

Another key advantage of cross-vaccination is that - according to the values determined by the researchers in the laboratory - it also protects more strongly against the alpha, beta and gamma virus variants. In contrast, the immune response to these variants often remained weak after the double AstraZeneca vaccination. "We are now testing the immune response to the virus variant delta, whose share of new infections in Germany is currently a good six percent," says Professor Förster. "A double vaccination with the Biontech/Pfizer vaccine also protects very well against infections with the four virus variants addressed, this is known from other studies."

"We already have to think about what the immunity situation will be in late summer and autumn, and based on this situation we have to decide which groups need a third vaccination and with which vaccine they should be vaccinated," says Professor Förster. "Our study, together with other work from other research institutes, forms a good basis for recommendations of the vaccination sequence. A different vaccine could be used specifically for a booster vaccination - also, for example, to be able to react to new mutations that could emerge at any time," adds Professor Behrens.