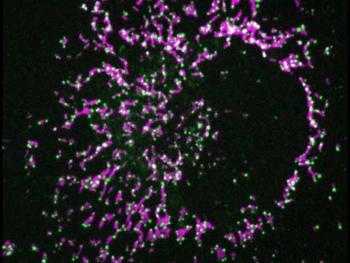 Interaction of BAX and DRP1 (green) in mitochondria (magenta) of an apoptotic cell.

Scientists led by Professor Ana J. Garcia-Saez at the CECAD Cluster of Excellence for Aging Research at the University of Cologne have shown that apoptosis, the programmed cell death, involves a direct physical interplay between the two proteins BAX and DRP1. DRP1 can serve as a direct cell death activator by binding to BAX without the need for other cell death triggers. This finding could lead to the development of new cell death regulators for cancer therapies, for example.

It is known that the so-called ‘apoptotic enforcer protein’ BAX encounters DRP1 in the cell at the mitochondrial membrane. The latter is a dynamin-like protein that plays a critical role in mitochondrial division. However, the functional implications of their interaction and the contribution of DRP1 to apoptosis have been highly controversial.

BAX is a key protein in the pathway to cell death. Understanding the mechanism of action of BAX is critical for therapeutic regulation of apoptosis. Using super-resolution confocal fluorescence microscopy and biochemical as well as biophysical methods in model membrane systems, the research team was able to demonstrate the direct interaction of the two proteins in dying cells. In addition, using a system that artificially brings the two proteins together, they investigated the functional consequences of the interaction of BAX and DRP1.

By combining methods such as the dimerization-dependent fluorescence technique, cross-linked mass spectrometry and the analysis of different protein pieces, the interaction surface could also be identified for the first time. DRP1 binds to the front end (N-terminus) of the amino acid chain of BAX, which is shown to be a regulatory region for BAX activity. ‘It was impressive to see that cells started to die just by forcing the interaction between BAX and DRP1, without the need for another death trigger,’ Garcia-Saez said. ‘It's great that we now know that DRP1 can act as a direct apoptosis activator, which for the first time gives functional significance to the connection between the two proteins. This could pave the way for the development of new BAX regulators for therapeutic applications."