Vital metal - how can molybdenum be used biologically? 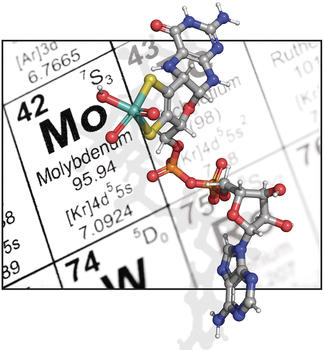 Molybdenum is a metal that is required for many technical applications. In the cell, it occurs in the form of the molybdenum cofactor, whose precursor is shown here in color. The mechanism by which molybdenum is incorporated into this precursor was unknown for a long time.

To find out, scientists in Dr. Tobias Kruse's team at TU Braunschweig have created a working model based on a specific patient mutation in molybdenum insertase. The molybdenum insertase is then defective. The metal molybdenum can therefore no longer be made available to the body in the form of the molybdenum cofactor. Affected patients develop epilepsy-like seizures on average within 24 hours after birth. This leads to the massive death of nerve cells, which ultimately results in the death of affected individuals at an average age of three years. This disease is known as molybdenum cofactor deficiency and has so far been difficult to treat.

The "reconstruction" of the mutation in the defective molybdenum insertase of the patient was then the basis for the following research work for Dr. Tobias Kruse and his colleagues. In cooperation with Professor Douglas C. Rees at the California Institute of Technology (USA), the protein structure of molybdenum insertase was elucidated, leading to the discovery of a new, previously unknown step in the biosynthetic pathway of the molybdenum cofactor. In cooperation with Professor Martin L. Kirk (Department of Chemistry and Chemical Biology, The University of New Mexico, Albuquerque, USA), the mechanism of molybdenum insertion, i.e. the process by which molybdenum is incorporated into the organic component of the molybdenum cofactor, was then elucidated.

About 20 years ago, the mechanism of molybdenum insertion was already described, but for the synthesis of artificial molybdenum model compounds that can replicate the vital function of the molybdenum cofactor "in the test tube". The researchers have now shown for the first time that the final step of molybdenum cofactor biosynthesis in the cell follows the same scheme as the synthesis of molybdenum model compounds in the chemistry lab. It is now known that this mechanism underlies not only human but also plant and fungal molybdenum insertion. This indicates that this process arose very early in the evolution of living organisms.

However, the most important aspect of this work has undoubtedly been named by one of the peer reviewers of the paper now published in Nature Chemistry: With the knowledge of the mechanistic details of how molybdenum is functionalized - i.e. made biologically usable - in the cell, the foundations have now been laid for compensating for the lack of molybdenum insertase activity in affected patients. Suitable model compounds have already been and are being developed and synthesized in the group of Prof. Carola Schulzke (University of Greifswald) and are to be characterized in more detail at the TU Braunschweig for applicability to therapy of molybdenum cofactor deficiency.