Vaccination success without B cells 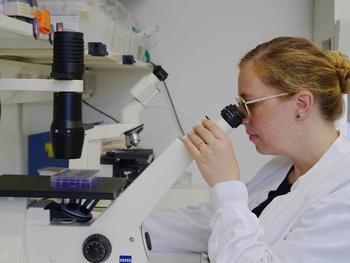 Dr. Dr. Theresa Graalmann is the first author of the study

Immunosuppressed patients often cannot build up good protection after a vaccination because the necessary cells of the immune system function less well or are not present at all. This has been studied especially in the drug therapy of rheumatoid arthritis. Scientists from TWINCORE and the Hannover Medical School have now published in the journal Annals of the Rheumatic Diseases the circumstances under which this group of people can nevertheless be successfully vaccinated. Based on their data, they recommend a promising strategy for the COVID-19 vaccination of rheumatism patients who are treated with the drug Rituximab.

Autoimmune diseases, such as rheumatoid arthritis or multiple sclerosis, in which the body's own immune system causes inflammation, are treated with drugs that remove a certain type of immune cells. These are the so-called B cells, whose most important role is the production of antibodies against pathogens, for example during an infection. However, patients under therapy are thus unable to produce protective antibodies, even after vaccination.

Those affected then depend on another cell type, the cytotoxic T cells, for their immune defence. "We have seen in patients with rheumatoid arthritis that after B-cell depletion they also show a poorer T-cell response after vaccination than healthy people," says Dr. Dr. Theresa Graalmann, researcher at the Institute for Experimental Infection Research at TWINCORE and resident physician at the Department of Rheumatology and Immunology at the Hannover Medical School (MHH). The biologist and medical doctor led the research project and is first author of the study. "We were also able to confirm the same observation in the mouse experiment, so it is a cross-species mechanism. This project is a great example of how clinical studies can be complemented with mouse experiments to draw important conclusions for patients," says Prof. Ulrich Kalinke, Director of the Institute for Experimental Infection Research at TWINCORE.

Communication between different immune cell types depends on whether the body produces the messenger substance type 1 interferon (IFN-I) in response to the pathogen. If IFN-I is produced, T cell responses rely on B cells. However, if IFN-I is not produced, T-cells can provide the immune response without support. "It's the same with vaccinations," says Graalmann. "Depending on the mode of action, T cells function either with or without IFN-I." The T-cell response alone also produces some degree of vaccine protection.

The effect of rituximab, a drug often used to treat autoimmune diseases, lasts about six months. After that, the body starts to make B cells again. "Normally, patients can be vaccinated before they receive the next dose of rituximab," says Prof. Torsten Witte from the Department of Rheumatology and Immunology at MHH. "Waiting half a year to get the COVID-19 vaccination, however, could be life-threatening for these people. They are particularly at risk of developing severe courses of disease in the event of a coronavirus infection."

The different COVID-19 vaccines are based on two different technologies, mRNA or vector. "The mRNA vaccines induce IFN-I, thus it can be assumed that the T-cell response will be correspondingly absent in the lack of B-cells present. With the vector-based vaccines, no interferon is produced," says Graalmann. There is a T-cell response and some vaccine protection can be built up even without B cells. "So from our data, we can derive the recommendation that patients treated with rituximab should better be immunised with a vector vaccine to achieve some vaccination success even without B cells," says Graalmann. In a next step, this concept still has to be tested in clinical trials.