How cells can recover their development and longevity after damage by UV: Discovery may enable therapy against premature aging 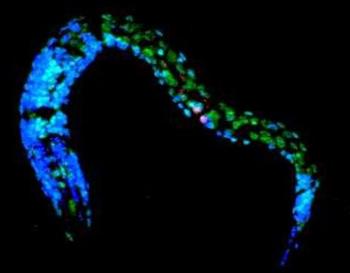 The image shows a confocal microscopy of C. elegans after UV irradiation. There are increased double occupations of the histones: H3K4me2 in green. Triple occupancy (H3K4me3) are stained red and nuclei are marked blue.

A research team from Cologne has discovered that a change in the DNA structure – more precisely in the chromatin – plays a decisive role in the recovery phase after DNA damage. The key is a double occupation by two methyl groups on the DNA packaging protein histone H3 (H3K4me2). The discovery was made by scientists under the direction of Prof. Björn Schumacher of the Cluster of Excellence for Aging Research CECAD, the Center for Molecular Medicine Cologne (CMMC), and the Institute for Genome Stability in Aging and Disease at the University of Cologne. The specific change enables genes to be reactivated and proteins to be produced after damage: The cells regain their balance and the organism recovers. The protective role of H3K4me2 was identified in experiments with the nematode Caenorhabditis elegans. The study has now been published in the journal Nature Structural & Molecular Biology.

The genome in every human cell is damaged on a daily basis, for example in the skin by UV radiation from the sun. Damage to the DNA causes diseases such as cancer, influences development, and accelerates aging. Congenital malfunctions in DNA repair can lead to extremely accelerated aging in rare hereditary diseases. Therefore, preservation and reconstruction processes are particularly important to ensure development and to maintain tissue function. DNA, which is rolled up on packaging proteins – the histones – like on cable drums, is regulated by methyl groups. Various proteins are responsible for placing methyl groups on histones or removing them. The number of groups on the packaging proteins affects the activity of genes and thus the protein production of the cell.

In experiments with the nematode, the research team showed that after repairing damaged DNA, two methyl groups were increasingly found on the DNA packages. Furthermore, they found that errors in placing these two methyl groups on the histones (H3K4me2) accelerated the damage-induced aging process, while increased position of this histone alteration prolongs the lifespan after DNA damage. By controlling the proteins that either set or remove these methyl groups, the resistance to DNA damage – and thus the aging process of the animals – could be influenced.

‘Now that we know the exact changes in chromatin, we can use this to precisely limit the consequences of DNA damage,’ said Schumacher. ‘I hope that these findings will enable us to develop therapies for hereditary diseases characterized by developmental disorders and premature aging. Due to the fundamental importance of DNA damage in the aging process, such approaches could also counteract normal aging and prevent age-related diseases.’