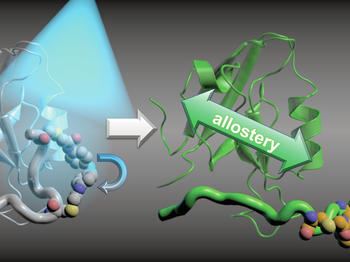 Informations of proteins: An interruption of this coupling, the allostery, leads to signals not being passed on.

Proteins transduce information and signals within the human body by changes in their structures. For example, hormones binding to their target proteins cause a structural change which in turn opens new binding sites for other proteins elsewhere on the surface of the protein. Researchers refer to this coupling of different, distant binding sites as allostery. An interruption of this coupling leads to signals not being passed on. This can be achieved by molecules specifically designed for this purpose, which thereby obtain pharmacological effects as analgesics or chemotherapeutic agents. To selectively design such molecules, scientists need to learn more about the possible mechanisms of allostery. A team led by Prof. Dr. Gerhard Stock from the Biomolecular Dynamics group at the Institute of Physics at the University of Freiburg and Prof. Dr. Peter Hamm from the Institute of Chemistry at the University of Zurich, Switzerland provides important insights into the molecular details of allostery in the journal PNAS.

The researchers tracked time-resolved allosteric changes in the test protein PDZ2, which are caused by the binding of a peptide ligand. To this end, the research group at the University of Zurich performed time-resolved vibrational spectroscopy, while the physicists at the University of Freiburg simulated the corresponding changes on an atomistic level using the bwHPC cluster BinAC at Tübingen. This combination enabled the scientists to understand how a change in the ligand binding mode induces protein structure changes passing through the protein with atomic resolution and a time scale range from picoseconds to microseconds. The real-time observation of signal transduction in proteins showed that allostery is based on changes in both the structure and dynamics of the protein, which exhibits hierarchical dynamics, where a structural change takes about ten times longer than a preceding change.