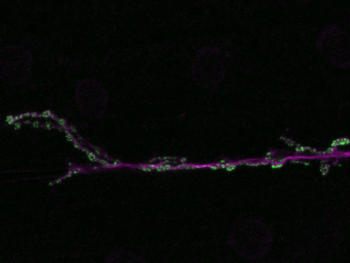 Neuromuscular junction of a neuron and the muscle, in green the synapses are shown.

An alteration, either by excess or by default, in the number of synapses (the points of contact between neurons where the transmission of the nerve impulse occurs) is associated with the development of cognitive, morphological and psychiatric disorders, hence the importance of being able to regulate the formation of synapses to treat some pathologies. A team of researchers from the Spanish National Research Council (CSIC) has discovered the involvement of a family of proteins, chaperones (HSPs), in this process.

The work, which is published in PLOS ONE, points out that chaperones, which are the proteins responsible for protein degradation, maintain cellular functioning and respond to external stimuli, environmental changes or neurodegenerative events. Through studies in fruit fly specimens (Drosophila melanogaster), scientists have studied the function of the chaperones sHSP23 and sHSP26 during development, and the regulation of their activity by a new protein kinase that they have named Pinkman (Pkm).

"We have seen that increasing the levels of expression of sHSP23 and sHSP26 increases the number of synapses and neuronal activity, which suggests pro-synaptogenic activity for these chaperones, that is, their normal function is to generate synapses or contribute to their maintenance", explains CSIC researcher Sergio Casas-Tintó, who works at the Cajal Institute. "Therefore - adds the researcher - the balance between Pinkman protein and sHSPs proteins during the development of the nervous system is proposed as a regulation mechanism for the correct formation, function and response of the nervous system to environmental stress".

Since it is known that the activity of chaperones declines with age, it is possible to study their relationship with the degeneration of the nervous system resulting from aging. "Knowing the mechanisms that modulate the number of synapses may have implications for the development of the nervous system and neurodegeneration, memory processes, information processing and behavior. All this will have to be demonstrated later", he concludes.