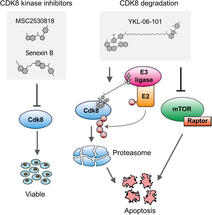 Concept of a dual degrader

Acute lymphoblastic leukaemia (ALL) is a rare form of cancer that commonly affects children, mostly under the age of five years. In the search for new therapeutic options, researchers at Vetmeduni Vienna have now discovered a new mechanism of the disease process and have developed a novel drug treatment line that is pioneering for future cancer therapies. The groundbreaking study was recently published in Nature Communications.

During their search for new therapeutic options for acute lymphoblastic leukaemia (ALL), a team of researchers at Vetmeduni Vienna have discovered a new function for a special enzyme, cyclin-dependent kinase 8 (CDK8), as part of the signalling system in ALL. Most important for future therapies is the presence of a therapeutic window: healthy blood cells are not affected by the absence of CDK8, while the leukaemic cells need CDK8 to survive.

Using leukaemia mouse models, first author Ingeborg Menzl from the Institute of Pharmacology and Toxicology at Vetmeduni Vienna and her colleagues demonstrated that CDK8-deficient leukaemia cells show an increase in cell death. “Of note is that the function of CDK8 in ALL is independent of enzymatic activity, which means that conventional kinase inhibitors are ineffective,” says Menzl. Based on this finding, the research team asked for potential interaction partners and discovered a previously unknown link between CDK8 and the mTOR signalling pathway in cancer cells.

In collaboration with the research team of Nathanael Gray from the Harvard Medical School, the researchers used a new generation of drugs that do not block enzymatic activity but induce the degradation of proteins (called PROTACs). In this way, it was possible to kill two birds with one stone, as senior author Veronika Sexl, the director of Institute of Pharmacology and Toxicology at Vetmeduni Vienna, explains: “Using a newly synthesized PROTAC, a small molecule we have called YKL-06-101, mTOR signalling is blocked while simultaneously degrading CDK8. This represents a novel therapeutic line in drug development: a single drug is enough to degrade one molecule, CDK8, while simultaneously blocking a signalling pathway enzymatically.” With this concept of a dual degrader, the researchers are pioneering for future cancer therapies.

A complement to the drugs currently in use

Acute lymphoblastic leukaemia (ALL) is caused by an uncontrolled proliferation of immature lymphocytes. This, in turn, can be caused by genetic alterations resulting in gene products such as the oncoprotein BCR-ABL. Although patients have benefited from the development of imatinib, a tyrosine kinase inhibitor, relapses occur. To guarantee therapeutic improvements it is essential to understand how the oncoprotein BCR-ABL affects cell signalling. The present study by Vetmeduni Vienna is an important contribution in this direction.