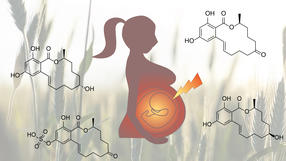 The xenoestrogen zearalenone migrates through the placenta, as researchers have now been able to show for the first time.

Early childhood life in the womb is particularly sensitive to the effects of environmental pollutants. A team from Empa and the University of Vienna has now for the first time been able to show how a pollutant from contaminated food - the environmental estrogen zearalenone - spreads in the womb and is metabolized into harmful metabolites.

Xenoestrogens are absorbed through the environment, especially through food. As oestrogen-like substances, they can have a profound effect on the body's hormonal balance. Zearalenone, the widespread food estrogen, is formed by fungi of the Fusarium genus and enters our body mainly via our diet through bread or muesli.

"The placental barrier offers the unborn child a certain protection against bacteria, viruses and some substances such as some medications or environmental toxins absorbed by the body. But zearalenone migrates through the placenta, as we have now been able to show for the first time," says Benedikt Warth from the Institute of Food Chemistry and Toxicology at the University of Vienna.

The path of zearalenone through the womb could be determined in analyses using fully functional placentas available after planned Caesarean sections. "It is crucial to use human placentas to obtain significant results concerning the transport and metabolism of zearalenone," says Empa researcher Tina Bürki from the Particles-Biology Interactions Laboratory in St. Gallen. "The reasons are the properties of the human placenta, because structure, function and metabolic capacity are unique and specific."

The researchers not only determined the concentrations of zearalenone in the tissue of the placenta itself. Using a nutrient solution before and after entry from the placenta, they also simulated the area of mass transport to which the fetus is exposed. At the same time, they were able to investigate the various metabolic products produced by enzymes in the placenta.

"As soon as we ingest environmental substances, these are usually detoxified and excreted by our metabolism. However, there are also enzymes that activate these substances even more strongly," said Bürki. In this case, too, the placenta forms a new metabolic product from zearalenone with about 70 times higher estrogen activity. Even low concentrations could have a greater effect on the unborn child than previously assumed. " These findings should be taken into account in future risk assessments - even if the limits for baby food and breast milk substitutes are already more strictly regulated than for other products and the EU has introduced the world's lowest thresholds," says Benedikt Warth.

The body's hormonal balance is highly sensitive. It is assumed that exposure early in life to foreign estrogens many decades later could have an effect on various diseases such as breast or cervical cancer, but also on other manifestations such as premature puberty or infertility. "Until further research results are available, one can only recommend a balanced diet in order to reduce the exposure to toxins," said the team of authors.

The analytical method allows the simultaneous detection of more than 50 different foreign estrogens in biological samples. "Our method includes practically all important foreign substances that affect the estrogen system. This also includes numerous other substances that are currently the subject of much discussion, such as bisphenol A or pesticides," says Warth. With the new analytical method, researchers hope to be able to better investigate the exposure and combinatorial effects of environmental pollutants in the human body in the future.