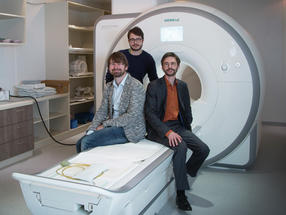 Under the leadership of TU Graz, an international research team has developed a contrast medium concept for MRI, promising unprecedented features in medical imaging.

Molecular imaging techniques are playing an increasingly important role in medical diagnostics and developing new treatment methods. An interdisciplinary team of researchers from the fields of chemistry, material sciences, biomedicine, quantum physics and toxicology has managed to develop the foundations for a novel contrast medium for MRI in the framework of the FET Open EU excellence programme. Molecular changes in the human body could thus become detectable by MRI and improve and elucidate the treatment of diseases such as cancer, Alzheimer's and heart diseases.

In MRI (magnetic resonance imaging), the nuclei of hydrogen atoms in tissues are subjected to a high-frequency magnetic field. In this way they produce weak signals in the receiving coils which can be processed into images. ‘Our basic idea was to send molecules with quadrupole nuclei into the tissue and through the interaction between hydrogen nuclei and these quadrupole nuclei to modify the classical NMR signal,’ explains Hermann Scharfetter, professor at TU Graz’s Institute of Medical Engineering and head of the international working group. Strictly speaking, the researchers pursued the aim of changing the decay of the signal over time – also known as quadrupole-relaxation enhancement (QRE). Scharfetter: ‘We believed that by using this principle we were not only using the distribution of the contrast medium to better depict the organs, but were also able to prove molecular changes brought about by the sensitivity of QRE on the chemical environment, so that we basically have the ability to switch the contrast on or off.’

Proof of the effect

After three years of research in the framework of the CONQUER FET Open project, Scharfetter and his team have now achieved a breakthrough in groundbreaking features in medical imaging. The novel contrast medium was able to be developed to the point that the explored effect can be used with the field strengths of standard MRI scanners. ‘We continue to measure the NMR signal of the hydrogen nuclei, but change the relaxation through the interaction with the quadrupole nuclei and thus the contrast. To do this, we only had to modify a standard MRI scanner in such a way that we were able to slightly shift the magnetic field in order to switch the contrast on or off. The results have been published in the high impact journal Physical Review Letters X and an EU patent applied for.

The hoped-for results came about with chemical compounds of the element bismuth. Many bismuth compounds have favourable quadrupole resonance frequencies which lie close to the magnetic fields of clinical MRI scanners. Furthermore, bismuth shows a strong coupling with hydrogen nuclei and is occasionally used in medicine. Further investigations have to be carried out to ensure that the contrast medium can be clinically deployed, as Scharfetter explains: ‘In the future, we have to design special nano particles which, on the one hand, contain bismuth components, and on the other hand, can be well distributed in the human body without any side-effects and health risks. But a lot of chemical synthesis has to be carried out beforehand. Our results, however, form a basic building block for a “smart” contrast medium.’