Why asbestos is so dangerous 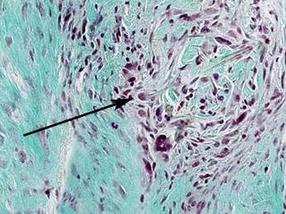 An arrow points to an asbestos fiber in the cell layer around the small intestine of a mouse (mesothelium). The fibres can lead to chronic inflammation and later on to cancer.

Long, pointed asbestos fibres induce chronic inflammation, which can lead to cancer. SNSF-funded researchers have found underlying mechanisms for this and hope their results will help prevent damage.

The fact that asbestos causes cancer has been largely undisputed for nearly 50 years. Now, researchers supported by the Swiss National Science Foundation (SNSF) have discovered why the fibres cause such damage to the body. "Chronic exposure to asbestos triggers a type of tissue repair," says Emanuela Felley-Bosco, who led the study. "The immune system goes out of balance and is no longer strong enough to combat tumour formation." The research is a collaboration between the University Hospitals of Zurich, Geneva and Toronto (Canada) as well as the University of Fribourg and ETH Zurich.

Contrary to popular belief, asbestos doesn't cause lung cancer. Rather, it passes through the lungs into a cell layer that surrounds all internal organs (the mesothelium). However, the lymphatic system is unable to clear the long and pointed fibres. Consequently, they remain stuck in the mesothelium where they cause persistent tissue injury, which can lead to cancer. To investigate how organisms react, the researchers injected asbestos fibres into the abdominal cavity of mice, which also contains mesothelium tissue.

Although asbestos is chemically harmless, these micro-injuries trigger an immune reaction: inflammatory signals are sent out, mobilising white blood cells. Tissue repair signalling pathways are activated in the inflamed mesothelium, which tpromote cell proliferation and thereby favour the growth of tumours. Moreover, the team found an accumulation of mutations in RNA – a kind of working copy of DNA. The researchers hypothesise that, among other things, these mutations serve to attenuate the tissue repair immune response. As a result, tumour formation is no longer effectively combated and cancer can develop.

A similar mechanism is at work in humans: analysis of data from a gene bank revealed that tumours from patients with poor outcomes also produce large amounts of the enzyme that causes the mutations in the RNA.

"Previously, cancer caused by asbestos was a black box," says Felley-Bosco. Her team's findings will be useful in recognising early signs of inflammation and in developing a specific therapy against mesothelial cancer. "A therapy against immune system inhibitors is a promising approach," says Felley-Bosco. "Similar therapeutic approaches to treating mesothelial cancer are already being used today." A clinical study of immunotherapy at the advanced stage of the disease is also under way at five Swiss hospitals and ten other hospitals in the UK and Spain (see links).

The findings could also prove useful in understanding other types of cancer that can be caused by chronic inflammations such as ulcerative colitis, Crohn's disease and Helicobacter pylori infections.