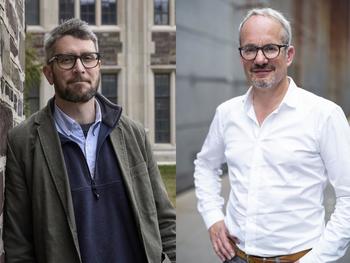 Anthony Hyman, the managing director of the Max Planck Institute of Molecular Cell Biology and Genetics (MPI-CBG), and Clifford Brangwynne, Professor of Chemical and Biological Engineering at Princeton University and Howard Hughes Medical Institute, have been honored with one of the three 2023 Breakthrough Prizes in Life Sciences. They receive this award for discovering a fundamental mechanism of cellular organization mediated by phase separation of proteins and RNA into membraneless liquid droplets. The Breakthrough Prize, renowned as the “Oscars of Science,” recognizes the world’s top scientists and groundbreaking discoveries in Life Sciences, Fundamental Physics (one per year) and Mathematics (one per year). Each of the five main prizes is $3 million, and the addition of the early-career awards brings this year’s total prizes to $15.75 million.

Until recently, it was thought that organelles—specialized subunits surrounded by membranes—performed the majority of the work in a cell. But Anthony Hyman and Clifford Brangwynne discovered an entirely new physical principle that concentrates cellular interactions between proteins and other biomolecules in the absence of membranes. They described dynamic liquid-like droplets that form rapidly by phase separation—similar to oil droplets forming in water —producing temporary structures protected from the molecular turmoil of the watery cell interior. Since their discovery, they and others have shown that these membraneless liquid condensates play a role in numerous cellular processes, including cellular signalling, cell division, the nested structure of nucleoli in the cell nucleus, and the regulation of DNA. Their discovery is a fundamental advance in our understanding of cellular organization and is likely to lead to clinical applications in the future, including for neurodegenerative diseases such as ALS.

“Congratulations to all of the Breakthrough Prize winners, whose incredible discoveries will pave the way for scientific discovery and spur innovation,” said CZI Co-Founders and Co-CEOs Priscilla Chan and Mark Zuckerberg. “These laureates and early-career scientists are pushing the boundaries of what’s possible in research and science, and we’re thrilled to honor their accomplishments.”

“The laureates honored today embody the remarkable power of fundamental science,” said Yuri Milner, “both to reveal deep truths about the Universe, and to improve human lives.”

“The 2023 laureates have produced absolutely stellar science,” said Anne Wojcicki. “The creativity, ingenuity and sheer perseverance that went into this work is awe-inspiring.”

Anthony Hyman, 60, was born in the Israeli city of Haifa. After studying zoology at University College, London, he earned his doctorate at King's College, Cambridge, in 1987 on embryonic cell divisions of the nematode Caenorhabditis elegans. As a postdoctoral fellow, he went to the University of California, San Francisco. In 1993, Hyman became a group leader at the European Molecular Biology Laboratory in Heidelberg. In 1999, he was one of the founding members of the Max Planck Institute for Molecular Cell Biology and Genetics (MPI-CBG) in Dresden, which he still heads together with a team of directors. He has been a Fellow of the British Royal Society since 2007, an international member of the American National Academy of Sciences since 2020, and a member of the German National Academy of Sciences Leopoldina since 2021. In 2022, he received the Körber Prize for European Science.