Prizewinner from the Max Planck Institute in Marburg, Germany is working on capturing carbon dioxide and converting it into new chemical building blocks using biocatalysts 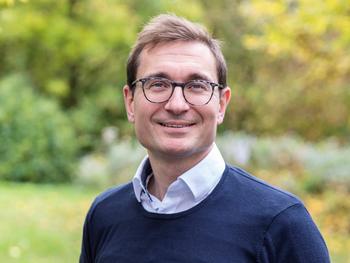 Merck announced the winner of the 2022 Future Insight Prize in the category of “Energy”. The € 1 million prize was awarded at the “Curious2022 – Future Insight” scientific conference in Darmstadt, Germany, to Professor Tobias Erb (43), Director at the Max Planck Institute for Terrestrial Microbiology in Marburg, Germany. Using synthetic biology, his research group discovers and combines biocatalysts to enable more efficient carbon dioxide (CO2) fixation. These new-to-nature solutions make it possible to convert CO2 into valuable chemical products, which in turn, can be used as feedstock for fuel.

“Science and technology hold the keys for society to accelerate its ability to improve the health of humanity and our planet. Tobias Erb has re-engineered photosynthesis to provide humanity with efficient capturing and conversion of carbon dioxide into useful products,” said Belén Garijo, Chair of the Executive Board and CEO of Merck. “He is a perfect recipient of the Future Insight Prize, and we hope this award will further accelerate the commercialization and adoption of his discoveries.”

Bettina Stark-Watzinger, German Federal Minister of Education and Research, commented: “With the Future Insight Prize, Merck honors outstanding science in a special way. The prize winners stand for innovative research and successful transfer. With their work, they make important contributions to solving the pressing questions of our time. The prize money could hardly be better invested than in the future research of these bright minds.”

Upon receiving the award, Tobias Erb said, “Our fundamental long-term research approach has started bearing fruit. My research team currently aims to deploy our technology in different setups to unlock the full potential of synthetic CO2 fixation”. “Research in our lab interfaces biology and chemistry and centers on the discovery, function and engineering of novel carbon-dioxide-converting enzymes and their further use in engineered and artificial photosynthesis. In doing so, we aim to provide novel solutions for improved carbon capture in biotechnology, agriculture and synthetic chemistry,” he continued.

Tobias Erb’s project on carbon dioxide fixation and the creation of new solutions has already led to numerous breakthroughs. His team discovered a novel class of CO2-fixing enzymes, enoyl-CoA carboxylases/reductases (ECRs), which are the most efficient CO2-converting biocatalysts known to date. The group also demonstrated that CO2 can be directly converted into pentadecane, a prime component of diesel fuel, as well as into a polyketide that acts as a precursor to an antibiotic drug. Using a “metabolic retrosynthesis” approach, Erb’s research team designed and realized artificial CO2-fixation pathways that are more efficient than natural photosynthesis. The group is currently focusing on implementing these synthetic pathways in living cells, while simultaneously making progress with the construction of artificial systems that enable more efficient light-driven capture of CO2 than their natural evolved counterparts.

A schematic and graphic depiction of the prizewinning work can be found here. The winner of the Future Insight Prize is selected by a jury comprising more than 80 renowned top scientists from different research fields – including many Nobel laureates. Merck first announced the Future Insight Prize in 2018. It is intended to recognize outstanding scientists who are making meaningful contributions to fields that are critical to the future of humanity. In 2019, the very first winners were Pardis Sabeti from Harvard University and the Broad Institute, Cambridge, Massachusetts, USA, and James Crowe from Vanderbilt University Medical Center, Nashville, Tennessee, USA, for their research in the area of pandemic protection. The following year, Stephan Sieber from the Technical University of Munich, Germany, received the award for his project on a multi-drug resistance breaker. The 2021 winners Ting Lu from University of Illinois Urbana-Champaign, USA, and Stephen Techtmann from Michigan Technological University, USA, were recognized for their joint research on the conversion of plastic waste into edible foods. Next year’s Future Insight Prize will be awarded for an early warning system to constantly monitor circulating bacteria and viruses in order to detect newly emerging pandemics. Proposals are welcome and can be submitted here until Dec 31, 2022.