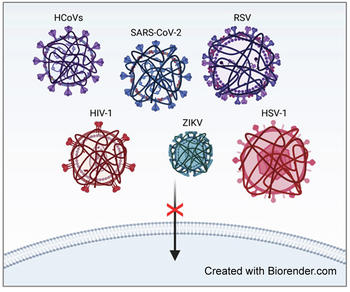 A large number of viruses are known to make life difficult for both humans and animals. While broad-spectrum antibiotics can offer protection against a wide variety of bacteria, there are currently no analogous clinically available broad-spectrum antiviral agents. An international research team has now shown that polystyrene sulfonate (PSS) has the potential to be used in the prevention of viral infections – not only in the fight against the SARS-CoV-2 and cold viruses, but also Zika, Herpes and HIV-1. The study, which was jointly headed by Ulm University and Aarhus University in Denmark, has now been published in the highly respected journal ‘Advanced Science’.

The best way to stop viruses from multiplying and spreading is to prevent them from entering cells in the first place. But we are still waiting for entry inhibitors that are able to keep different virus families and different virus types in check. At present, no such broad-acting viral entry inhibitor is clinically available. Now, a research project led by Ulm University Medical Center and Aarhus University has yielded promising results. ‘We have shown that negatively charged polymers can prevent viruses from entering cells. We also could provide evidence that the polymer wraps itself around the viral envelope proteins and that its charge disrupts the interaction with the cell’s receptor proteins,’ explained Rüdiger Groß, doctoral research student at the Institute of Molecular Virology at Ulm University Medical Center and lead author of the paper published in the journal ‘Advanced Science’.

Earlier studies by the Ulm and Aarhus researchers had already shown that the polymer PSS (polystyrene sulfonate) is an effective antiviral entry inhibitor. ‘We have now examined optimisation strategies and determined the extent to which they improve the broad-spectrum efficacy of the polymer,’ said Professor Jan Münch, Co-Head of the Ulm Institute of Molecular Virology. Münch coordinated the study jointly with his Danish colleague Professor Alexander N. Zelikin from Aarhus University. Zelikin and his team, who conduct research in Aarhus University’s Department of Chemistry and in the Interdisciplinary Nanoscience Center, were responsible for the synthetic chemistry work within the project. ‘By using longer polymer chains and coupling these to gold nanoparticles, we’ve been able to further enhance inhibitory activity against most viruses,’ explained Zelikin.

By running cell culture experiments, the researchers were able to show that PSS has antiviral activity against SARS-CoV-2, including the Omicron variant. Evidence of entry inhibition was also observed in the case of HIV-1, herpes simplex virus type 1, Zika virus, respiratory syncytial virus and common cold corona viruses OC43 and NL63. Substance tolerance tests were conducted on mice. These tests showed that PSS is well tolerated when administered intranasally using, for example, a nasal spray. Using appropriate mouse models, the team was also able to demonstrate that PSS inhibited infectivity by SARS-CoV-2 and RSV in animals.

‘Our study shows that PSS and its derivatives are highly promising candidates for the development of broad-spectrum viral entry inhibitors,’ the researchers concluded. The team is currently studying other animal models to investigate how localised delivery of PSS using sprays or nebulisers can facilitate the treatment or prevention of respiratory viral pathogens. The research project received funding from the European Research Council through its ‘Fight-nCoV’ programme. In addition to researchers from Ulm University and Aarhus University, scientists from research institutions in Leipzig (Germany), Brazil, Sweden and France were also involved in the study.