The results pave the way to new macrophage-based cell therapies 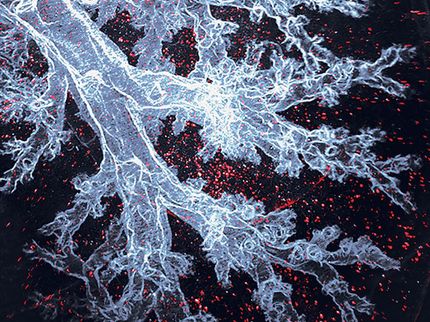 Alveolar macrophages are the immune cells that specifically live in the lung air sacs, here visible as red dots in an otherwise transparent mouse lung.

A recent study shows that certain immune cells can restore their normal functions when introduced back into the body, even after being multiplied in the laboratory to large numbers – the results pave the way to new cell therapies.

Macrophages are immune cells crucial for immune response, tissue repair, and the removal of cancer cells. Scientists see macrophages as promising living therapeutics. However, to be effectively used for therapies, macrophages have to be grown to large numbers in laboratory culture without losing their special functions. So far, it was unclear if this is even possible. A team of scientists from Dresden and Marseille now reports that macrophages grown for long periods in laboratory conditions can function normally when transferred back into the body and are indistinguishable from the cells that never left the tissue. The results pave the way to new macrophage-based cell therapies. The study was published in the journal Nature Immunology on February 24, 2022.

Macrophages are immune cells that are present in all organs of our body. They act as tissue guardians, nurturing other cells and removing detrimental substances such as bacteria, cellular debris, and even tumor cells. Therefore macrophages have been on the scientists’ radar as potential new living drugs to heal damaged organs, fight infections, and combat cancer. However, to achieve this cells must be grown outside of the body to large numbers. So far, this has been difficult for macrophages. On top of it, there were serious doubts that laboratory conditions might make them lose their special abilities.

Multiplying cells in the laboratory, so-called cell culture, is a common technique that over the years allowed enormous progress in biology and medicine. Nevertheless, cells grown in the lab are removed from their natural environment and the physical signals that appear essential to their function. Cells are grown on plastic culture dishes and bathed in artificial nutrient solutions. They have to adapt to these new conditions – a real culture shock. “We wanted to know exactly how the cells change in prolonged cell culture and whether these changes are permanent or not,” says Prof. Michael Sieweke, Humboldt Professor at the TU Dresden.

Prof. Sieweke’s team at the Center for Regenerative Therapies Dresden (CRTD) at TU Dresden and the Center of Immunology of Marseille Luminy (CNRS, INSERM, Aix-Marseille University) studied mouse lung macrophages, immune cells that naturally live in the air sacs of the lung. The team managed to grow the cells under laboratory conditions over several months and to large numbers. Although their looks and general characteristics were not affected, when examined more closely, it became clear that the cells had actually acquired many changes to adapt to the new environment.

“Every cell in our body has the same set of genes, but the cells differ in which genes are turned on and which are kept off. One can think of it as the molecular fingerprint of the cell – a unique combination of turned-on genes that distinguish, e.g., a lung macrophage from an intestine macrophage and a brain cell,” says Sethuraman Subramanian, one of the authors of the study. The scientists have compared the gene pattern in the cells cultured in the laboratory with their counterparts from the lung, and have seen substantial differences. “This was to be expected. Living on a plastic surface and having all the nutrients readily available is quite different from natural conditions. The cells had to get used to it and did so by changing the status of more than 3,000 genes. The question that truly interested us was whether these changes can be reversed,” explains Prof. Sieweke.

The team transferred the macrophages cultured in the lab back into their natural location in the mouse lungs. Detailed comparisons showed that the cells grown in the laboratory were indistinguishable from their equivalents who never left the lung. “We were surprised to see that the substantial adaptations that the macrophages made to live in the laboratory have proven to be completely reversible. The lab-cultured macrophages had forgotten about the time they spent in the lab and fully assumed their normal function and status in the lung, oblivious of their previous culture shock,” says Clara Busch, one of the authors of the study.

Cell Therapies of the Future

Although the research was performed in mice, it has very promising implications for human therapies. The ability to shuttle the macrophages between the cell culture and their natural environment shows great potential for future macrophage-based cell therapies. The lung macrophages could be multiplied in the laboratory and experimentally tailored for battling a specific disease before being delivered to the patient’s lungs where they can immediately start to perform their function. Such a setup could be used to treat cancer, fibrotic disease, or infections similar to COVID-19 in the lung and eventually in other organs.
“This study started long before the beginning of the pandemic but demonstrates again that fundamental research can serve as a source of future therapeutic applications,” concludes Prof. Sieweke.