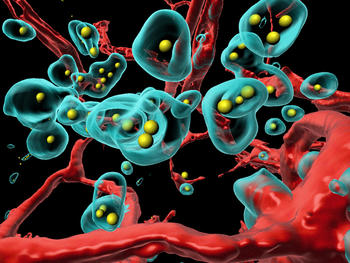 View of the tumor from the inside. A piece of the tumor was made completely transparent and scanned in 3D with a special microscope. The components labeled with fluorescent colors were rendered in a rotatable 3D representation on the computer (red: blood vessels, turquoise: tumor cells, yellow: therapeutic antibody).

A new technology developed by UZH researchers enables the body to produce therapeutic agents on demand at the exact location where they are needed. The innovation could re-duce the side effects of cancer therapy and may hold the solution to better delivery of Covid-related therapies directly to the lungs.

Scientists at the University of Zurich have modified a common respiratory virus, called adenovirus, to act like a Trojan horse to deliver genes for cancer therapeutics directly into tumor cells. Unlike chemotherapy or radiotherapy, this approach does no harm to normal healthy cells. Once inside tumor cells, the delivered genes serve as a blueprint for therapeutic antibodies, cytokines and other signaling substances, which are produced by the cancer cells themselves and act to elimi-nate tumors from the inside out.

“We trick the tumor into eliminating itself through the production of anti-cancer agents by its own cells,” says postdoctoral fellow Sheena Smith, who led the development of the delivery approach. Research group leader Andreas Plückthun explains: “The therapeutic agents, such as therapeu-tic antibodies or signaling substances, mostly stay at the place in the body where they’re needed instead of spreading throughout the bloodstream where they can damage healthy organs and tissues.”

The UZH researchers call their technology SHREAD: for SHielded, REtargetted ADenovirus. It builds on key technologies previously engineered by the Plückthun team, including to direct ade-noviruses to specified parts of the body to hide them from the immune system.

High amount of drugs in the tumor, low concentration in other tissues

With the SHREAD system, the scientists made the tumor itself produce a clinically approved breast cancer antibody, called trastuzumab (Herceptin®), in the mammary of a mouse. They found that, after a few days, SHREAD produced more of the antibody in the tumor than when the drug was injected directly. Moreover, the concentration in the bloodstream and in other tissues where side effects could occur were significantly lower with SHREAD. The scientists used a very sophisticated, high-resolution 3D imaging method and tissues rendered totally transparent to show how the therapeutic antibody, produced in the body, creates pores in blood vessels of the tumor and destroys tumor cells, and thus treats it from the inside.

Use to combat Covid-19 being investigated

Plückthun, Smith and colleagues emphasize that SHREAD is applicable not only for the fight against breast cancer. As healthy tissues no longer come into contact with significant levels of the therapeutic agent, it is also applicable for delivery of a wide range of so-called biologics – power-ful protein-based drugs that would otherwise be too toxic.

In fact, members of the Plückthun group are currently applying their technology in an SNF-funded project aimed as a therapy for Covid-19. Adenoviral vectors are already being used in several of the COVID vaccines, including the Johnson & Johnson, AstraZeneca, China’s CanSino Biologics and Russia’s Sputnik V vaccines – but without the innovative SHREAD technology. “By delivering the SHREAD treatment to patients via an inhaled aerosol, our approach could allow targeted production of Covid antibody therapies in lung cells, where they are needed most,” Smith ex-plains. “This would reduce costs, increase accessibility of Covid therapies and also improve vac-cine delivery with the inhalation approach.”