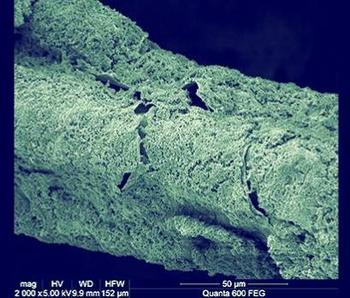 SEM image shows the dense and uniform cathodic biofilm, which mainly comprises chemolithoautotrophs, and could serve as biocatalysts for efficient carbon dioxide conversion to acetate.

Recycling CO2 could simultaneously reduce carbon emissions into the atmosphere while generating useful chemicals and fuels, explains Bin Bian, a Ph.D. student in Pascal Saikaly's lab, who led the research. "Microbial electrosynthesis (MES), coupled with a renewable energy supply, could be one such technology," Bian says.

MES exploits the capacity of some microbes to take up CO2 and convert it into chemicals, such as acetate. In nature, chemolithoautotroph microbes metabolize minerals as a source of energy in a process that involves the shuttling of electrons. This capability can be exploited to turn CO2 into value-added products if the microbes are supplied with a stream of electrons and protons from anodic water splitting in an electrochemical cell.

In their latest work, rather than focus on the CO2-to-acetate step, the team worked on reducing the energy input for molecular oxygen (O2) production at the anode, a reaction that keeps the overall cell in balance. "In MES systems, the process that consumes the most energy is believed to be the oxygen evolution reaction (OER)," Bian explains. Researchers have used light-capturing anode materials, such as titanium dioxide, that harness energy from sunlight to help drive the OER. In their current work, the team investigated a promising alternative for the photoanode, the light-harvesting material, bismuth vanadate.

Bismuth vanadate absorbed energy from a much broader range of the solar spectrum than titanium dioxide, making the whole MES cell more efficient, the team showed. "We obtained solar-to-acetate conversion efficiency of 1.65 percent, which is the highest reported so far," Saikaly says. "This efficiency is around eight times higher than the 0.2 percent efficiency of global natural photosynthesis, which is nature's solar-powered process for converting CO2 into energy-rich molecules," Bian notes.

So far the team has kept the microbe biocatalysts supplied with a steady stream of electrons and CO2 to sustain their growth. "The next step for us is to test our system under real sunlight and monitor the resilience of the biocatalysts under an intermittent renewable energy source," Saikaly says.