Molecular Containers for the Sequestration of Neurotransmitter Drugs in Water 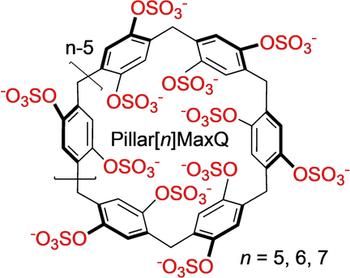 Molecular containers of the cyclodextrin type sequester their targets by complexation. The ring- or barrel-shaped molecules recognize the molecular features of the target molecules and pull them into the central cavity using hydrophobic forces. Once the target molecule is inside this molecular container, it is neutralized. This host–guest complexation is the mechanism by which cyclodextrins, which are large, ring-shaped sugar molecules, eliminate unpleasant odors.

However, cyclodextrins are not very specific and fail for most alkaloids—a class of nitrogen-containing chemicals, including neurotransmitters and many illicit drugs. For these compounds, a class of molecular containers called pillararenes appear to be useful. They keep the alkaloids tightly bound in their pillararene cavity by wrapping a ring wall of aromatic benzene units around the hydrocarbon-rich molecular body.

Lyle Isaacs and his research team from the University of Maryland have further advanced the structure of the pillararenes to make the host–guest interactions stronger and more specific. “We envisioned to create a higher negative charge density around the mouth of the cavity by introducing acidic sulfate functional groups,” the authors wrote. The negatively charged sulfate groups attract and bind quaternary ammonium ions, which are a hallmark of several clinically important neuromuscular blocking agents. The sulfate groups also stiffened the molecular structure of the barrels, the researchers found, so that the drug guest was smoothly pulled into the cavity by hydrophobic forces.

The researchers dubbed the molecular containers Pillar[n]MaxQ, where n indicates a target-size-dependent diameter that is variable. They observed that this class of sequestering agents binds the neuromuscular blockers up to 100,000-fold more tightly than the cyclodextrin container Sugammadex, which is in clinical use. Moreover, the sequestering agent discriminated against acetyl choline, a natural transmitter substance of nerve impulses within the central and peripheral nervous systems, which should not be sequestered.

The authors measured the host–guest complexation activities of Pillar[n]MaxQ by titration studies involving calorimetry and nuclear magnetic resonance of the guest molecules. As pillararenes have also been shown to reverse the effects of neuromuscular agents in rats, the researchers are aiming to study the new Pillar[n]MaxQ sequestering actions in animal models. Because of the high binding and the specificity of the chemically tailored molecular containers, they are confident that they will observe positive results.