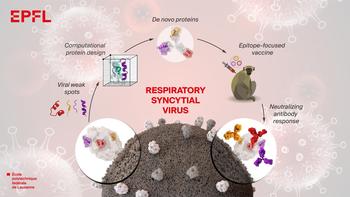 EPFL scientists have developed a new computational approach to create artificial proteins, which showed promising results in vivo as functional vaccines. This approach opens the possibility to engineer safer and more effective vaccines.

Vaccines are one of the most effective interventions to prevent the spreading of infectious diseases. They trigger the immune system to produce antibodies that protect us against infection. However, we still lack efficacious vaccines for many important pathogens, like the flu or dengue fever. "When a vaccine doesn't work well, we tend to think that it's because the antibodies produced are not protective," says Bruno Correia, a professor at the Laboratory of Protein Design & Immunoengineering (LPDI) in EPFL's School of Engineering. "It's usually because our immune system is simply making the wrong type of antibodies". Scientists in Correia's lab have now developed a strategy to design artificial proteins that very precisely instruct the body's immune system which antibodies to produce.

"We developed a protein design algorithm called TopoBuilder. It lets you construct proteins virtually as if you were putting Lego bricks together. Assembling artificial proteins that have novel functions is absolutely fascinating." says Fabian Sesterhenn, a PhD student and co-leading author.

A disease without a vaccine

The artificial proteins were created in the laboratory and then tested in animal models, and triggered the immune system to produce specific antibodies against weak spots in RSV. "Our findings are encouraging because they indicate that one day we will be able to design vaccines that target specific viruses more effectively, by prompting the immune system to generate those particular antibodies," says Correia. "We still have a lot of work ahead to make the vaccine we developed more effective - this study is a first step in that direction."

Methods for creating de novo proteins have applications well beyond immunology - they can also be used in various branches of biotechnology to expand the structural and functional range of natural proteins. "We can now use the protein design tools to create proteins for other biomedical applications such as protein-based drugs or functionalized biomaterials," concludes Sesterhenn.