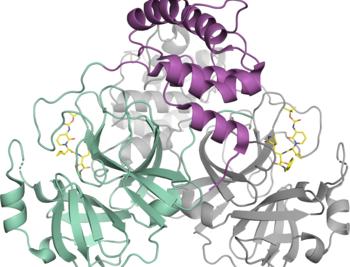 Schematic representation of the coronavirus protease. The enzyme comes as a dimer consisting of two identical molecules. A part of the dimer is shown in colour (green and purple), the other in grey. The small molecule in yellow binds to the active centre of the protease and could be used as blueprint for an inhibitor.

The Berlin Synchrotron Source BESSY II of the Helmholtz-Zentrum Berlin (HZB) will resume operation for two days. Scientists intend to use the intense X-ray radiation from BESSY II to search for active substances against the corona virus SARS-CoV2. Almost two hundred samples from an important protein of the virus will be examined in the coming hours. The samples are saturated with different molecules that could be used as components of active substances. The analyses will show whether certain molecules can dock particularly well to the protein molecule and thus hinder the reproduction of the virus. These molecules are best candidates as components of a future drug.

In February, Prof. Dr. Rolf Hilgenfeld (University of Lübeck) and his team had already decoded the structure of a protein of the SARS-CoV-2 virus at the X-ray source BESSY II. It was the main protease, which is involved in the reproduction of the virus. The three-dimensional shape of this protease is crucial for its function, in particular the environment of so-called active centres in the molecule.

Measurements at the MX stations at BESSY II have elucidated the protease's 3D structure in detail. "This was a major breakthrough," says Dr. Manfred Weiss, who heads the MX team at BESSY II. "As soon as the 3D structure is known, we can specifically look for active substances that block this protease and thus prevent the viruses from multiplying," explains Weiss.

The MX team has developed a method that now enables the systematic search for active substances: fragment screening. A suitable drug must have components or fragments that are precisely tailored to the 3D structure of the protein. They must fit like a key in a lock in order to obstruct the function of the protein.

A fragment library consists of hundreds of molecule groups that could be used as components of active substances. And just as a burglar uses a lock pick to gradually find out what the perfect key for the safe looks like, research can use fragment screening.  Different molecules are gradually being tested until the best components for a suitable drug are identified.

Nearly 200 samples are being analysed

Dr. Linlin Zhang from the Lübeck team has now produced a large number of protein crystals and impregnated each sample with a different compound from the fragment library. These samples will now be investigated at BESSY II.

From the results, it can be determined which fragments dock at all in the active centre of the viral protease. These fragments can then be considered as components for a drug.  "Of course, further experiments and series of measurements will have to be carried out afterwards, both in animal models and in human cell cultures," said Weiss. But in view of the infinite number of chemical compounds, this systematic pre-selection of promising building blocks offers the chance of enormous acceleration.

"We initially started with the smaller library of 96 fragments," says Weiss. "But if there are not enough hits, we can also work with a much larger library".