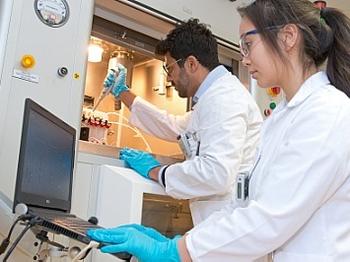 At an automated synthesis module Dr. Rodrigo Teodoro (left) and Dr. Thu Hang Lai from HZDR’s Department of Neuroradiopharmaceuticals prepare the reactants for the new radiotracer.

An interdisciplinary team from the Institute of Radiopharmaceutical Cancer Research headed by Prof. Peter Brust has won HZDR’s (Helmholtz-Zentrum Dresden-Rossendorf) third Innovation Contest. The researchers succeeded in developing a new substance that could improve image-based differential diagnostics of Parkinson’s disease. The four-member team, which includes Dr. Thu Hang Lai, Dr. Rodrigo Teodoro and Dr. Magali Toussaint, received the first prize among a total of 21 submissions. They invented a stable molecule that can dock onto receptors on nerve cells and contains a radionuclide, which can be detected by positron emission tomography (PET). The team is now ready for the next decisive step on the way to market approval of the so-called radiotracer: clinical studies to test whether the new substance also proves its value in everyday medical practice.

The award-winning development began in 2016 with a research project at the Leipzig-based HZDR Department of Neuroradiopharmaceuticals in cooperation with Carl Gustav Carus University Hospital Dresden, TU Dresden and ROTOP Pharmaka. The aim of the three-year project was to find out how nuclear medical methods can improve the differential diagnosis of Parkinson’s disease. Until now, physicians have relied on symptoms for diagnosis, such as certain motor dysfunctions.

Traditional therapy for Parkinson’s disease usually involves administering the drug levodopa. Its active ingredient, however, causes significant side effects, especially when used over many years. “However, we don’t yet have a suitable method for differential diagnosis, i.e. to detect at early stage whether a patient is sensitive to the side effects,” explains chemist Thu Hang Lai. The researchers focused on adenosine receptors, which are present on the nerve tracts of the brain. Adenosine, whose structure is similar to caffeine, is produced in the body and in nerve cells as a neurotransmitter.

Radiotracer docks onto adenosine receptors in the brain

When adenosine attaches to certain receptors, it causes these nerve cells to work more slowly - including those that are significant for Parkinson’s disease. The team therefore developed radiotracers, i.e. weak radiolabeled substances, which dock onto those receptors in the brain, thus indicating that they are available for therapeutic monitoring, for example. Those areas of the brain where increased radioactivity is detected must therefore have a particularly high number of receptors. This is shown using super-sensitive positron emission tomography (PET) imaging.

In an exceptionally short time span, the researchers have now successfully developed a metabolically stable radiotracer called [18F]FLUDA. Without suffering any degradation on its way to the brain, the radiotracer attaches itself to the adenosine receptors and can be detected there. After in vitro studies, biologist Magali Toussaint successfully tested the radiotracer in animal models. Subsequently, it also performed well in dosimetry and radiation protection studies, carried out in cooperation with the Clinic of Nuclear Medicine at the University of Leipzig, as well as in a toxicity study. “With a suitable radiopharmaceutical for use in humans, we hope to be able to make correct differential diagnoses and thus differentiate between Parkinson’s patients who are sensitive to side effects and those who are not,” expects Rodrigo Teodoro, who is responsible for radiolabeling in the team.

It might take a few years, however, before a drug can actually be used in clinics, the chemist points out, as the team is already facing the next challenge. In order to test their radiopharmaceutical, for which they have filed a patent application, they now intend to initiate clinical studies on patients as well as healthy individuals, which is a prerequisite for potential drug approval. They are currently looking for a clinical partner to validate its efficacy and safety.

“This is a highly dynamic team which communicates its idea with great enthusiasm and has been highly consistent and focused in its approach to product development,” the jury lauded the Leipzig scientists at the innovation contest. Every year, HZDR invites its researchers to participate in this contest in order to promote technology transfer to industry and society. The first three winners receive cash prizes. This year, second place went to Stefan Findeisen from the Department of Research Technology and Dr. Hannes Kühne from the Dresden High Magnetic Field Laboratory for their contribution “2-axis rotator for extreme sample environments”. Dr. Constantin Mamat, David Bauer and Falco Reissig took third place for their contribution “New carrier systems for radium and barium for use in radiopharmaceutical cancer research”.