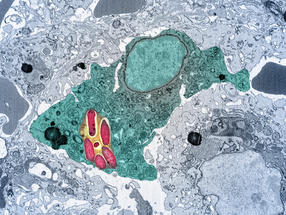 When pathogens invade the cells, our body combats them using various methods. Researchers at the University of Basel’s Biozentrum have now been able to show how a cellular pump keeps such invading pathogens in check. As the researchers report in “Science”, this pump causes a magnesium shortage, which in turn restricts bacterial growth.

When pathogens infect an organism, the defense system immediately starts to fight the bacteria. To escape the patrolling immune cells, some bacteria invade and replicate inside host cells. However, the host has developed various strategies to keep the intracellular bacteria under control.

Olivier Cunrath and Prof. Dirk Bumann at the Biozentrum, University of Basel, have now discovered that magnesium is crucial for bacterial growth inside host cells. Magnesium starvation is a stress factor for the bacteria, which stops their growth and replication. The host cells limit magnesium supply to these intracellular pathogens using a transport protein called NRAMP1.

In their study, the researchers investigated Salmonella, a bacterial pathogen that causes gastroenteritis and typhoid fever. The bacteria settle in small inclusions in the macrophages of the immune system. Whether and how quickly Salmonella replicate inside these vesicles and spread depends on the proper functioning of the NRAMP1 transporter.

“It has been known for decades that NRAMP1 makes the host more resistant, but how and why has remained unclear,” says Bumann. “We were greatly surprised to find that this transport protein pumps magnesium ions out of the vesicles and thus restricts Salmonella growth. This is a new and completely unexpected mechanism.”

Magnesium as an Achilles heel for bacteria

As magnesium is a central component of many metabolic enzymes, a shortage reduces bacterial metabolism and growth. “Magnesium seems to be the Achilles heel for intracellular pathogens. The less magnesium is available, the harder they try to get it. The bacteria go on alert and activate all magnesium uptake systems. Nevertheless, they do not manage to get enough,” says first author Cunrath. “However, if the pump in the host cells is defective, magnesium is available in sufficient quantities to enable rapid Salmonella growth.”

The function of NRAMP1 determines host susceptibility to infections. Animals and humans with reduced NRAMP1 are more susceptible to various intracellular pathogens. If this transporter is completely absent, even a very small number of pathogens can cause a fatal infection.

Infections are always a race between the host and the pathogen. New drugs that would make it even harder for the bacteria to obtain magnesium, could slow down the pathogens even more and thus provide the host a decisive advantage in defeating the infection.