Protein hitch hiking into the cancer cell: the next generation of platinum drugs 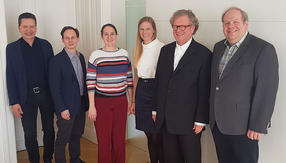 Despite numerous new forms of therapy, chemotherapy remains one of the most important strategies in cancer treatment. „For decades, the cancer therapeutics Cisplatin and Carboplatin have been used in almost every second therapeutic scheme“, says chemist Christian Kowol, researcher of the joint research cluster "Translational Cancer Therapy Research" of the University of Vienna and the Medical University of Vienna. Recent clinical studies with immune therapeutics even show a distinct increase of activity when combined with Cisplatin or Carboplatin. "Consequently, platinum-containing therapeutics will assert their essential role in modern cancer therapies, too", says Kowol.

However, the use of platinum-containing anticancer drugs comes along with several drawbacks: "A lack of selectivity and poor tolerability often lead to serious side effects that severely impair the patient's quality of life", adds biologist Petra Heffeter from the Institute of Cancer Research of the Medical University of Vienna and also scientist of the research Cluster. The development of platinum therapeutics with improved pharmacokinetics and increased tumour selectivity are urgently needed and, at the same time, has been a major challenge in anticancer drug research for a long time.

With support of the cancer scientists Bernhard K. Keppler, University of Vienna and Walter Berger, Medical University of Vienna both founders of the cluster, the researchers were able to develop the new platinum compound Albuplatin. Based on an innovative strategy, the initially inactive substance Albuplatin accumulates in the tumour tissue, followed by its selective activation and the release of the therapeutic agent.

A crucial step is the binding of the well-tolerated Albuplatin to the blood protein albumin utilizing it as a carrier. Albumin is an important source of nutrients for many types of cancer and consequently is specifically accumulated in tumour tissue. The protein thus serves as a natural, biodegradable nanocarrier.

By binding to albumin, Albuplatin is being infiltrated undetected like a "Trojan horse" in the tumour cells and is being released there as a result of the albumin degradation. Finally, Albuplatin is activated by reduction in the tumour cells, generating the active species which can kill the cancer cells. According to Kowol and Heffeter, this strategy "significantly increases the activity of the drug and at the same time significantly reduces side effects".

The scientists recently founded the spin-off company P4 Therapeutics in order to further develop Albuplatin into clinical trials. The team of P4 Therapeutics includes, next to Heffeter, Kowol, Berger and Keppler, also the CEO Nadine S. Sommerfeld, Alumna of the University of Vienna, and the economic advisor Otto Kanzler. The project is supported by the PreSeed programme of the Austrian Ministry of Transport, Innovation and Technology, implemented by the Austrian Wirtschaftsservice (aws). The company’s main objective is to complete preclinical development and to complete a first study of Albuplatin in patients.

Regarding further research and development activities, P4 Therapeutics will focus on biomarkers and studies on combination therapies, with a particular focus on immunotherapeutics. The company will sustainably strive towards the development of innovative and better tolerated therapies as well as enhance our knowledge of biomarkers for the selective stratification of patients.