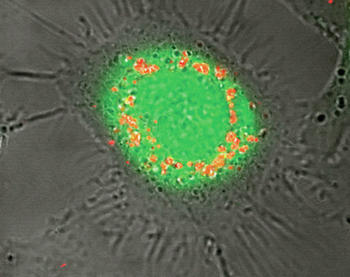 Researchers from Abo Akademi University and the University of Turku in Finland have discovered that the stability of functionalised nanoparticles is crucially dependent on all functional groups present on the surface. Using the sensitive nanoscale particle sizing and zeta potential measurement capabilities of a Zetasizer Nano from Malvern Instruments, they showed that poly(ethylene imine) (PEI) functionalised silica particles made promising candidates for bioapplications. This research has now led to the development of a selective nanoparticulate system for cancer cell targeting.

One of the key aims in biomedical science is to develop applications that can target and deliver drug to specific cell populations. Porous, non-toxic silica based structures have potential as biocompatible vehicles for intracellular delivery of an active ingredient. However, any modification to the original particle structure, such as the addition of an imaging agent, surface coating or a targeting agent, changes both its size and surface charge. This leads to changes in the stability of the particulate system.

Using both particle sizing using dynamic light scattering (DLS) and zeta potential measurements, the Finnish research team showed both direct and indirect effects on the suspension stability of functionalised silica particles as a result of surface modification. These results were published in the Journal of Nanomaterials in 2008. The team then went on, publishing results in ACS Nano in 2009 that used similar techniques to develop a multifunctional nanodevice for cancer therapy that demonstrated remarkably good cell specificity.

The size, stability and cell specificity of functionalised nanoparticles for targeted drug delivery is crucially dependent on each surface modification as well as the overall surface charge. Besides the fact that surface charge along with particle size are directly decisive for a nanoparticles’ biodistribution, other highly critical factors, such as cytotoxicity and the efficiency of cellular uptake, are associated with nanoparticle size. While the technique of dynamic light scattering (DLS) is ideally suited for the determination of particle size, zeta potential measurements indicate the repulsive force that is present and can be used to predict the long-term stability of the product.