Appreciation of the research in laser physics 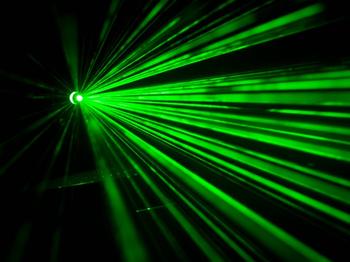 The researchers Arthur Ashkin and Gérard Mourou and Donna Strickland were announced today as this year's winners of the Nobel Prize for Physics. Their achievements in the field of laser physics was groundbreaking and worthy of the Nobel Prize Committee's appreciation.

The discovery of optical tweezers and the application of this tool in biological systems is the field Arthur Ashkin made a great leap forward. This allows to control and manipulate small organisms. Generating ultra-short optical pulses of high intensity is the field Gérard Mourou and Donna Strickland emerged. This has application possibilities in analysis, eye surgery and other fields were short laser pulses are vital.

The very first paper describing the principle for an infrared or optical maser arrived to Physical Review almost exactly 60 years ago and was authored by Arthur L. Schawlow and Charles H. Townes, then at the Bell Telephone Laboratories in New Jersey. It represented an extension of the maser technique to the infrared and optical regions. This paper provided the blueprint for how to construct an optical maser, and it was Theodor H. Maiman who in 1960 was the first to demonstrate coherent stimulated optical emission. The optical maser became known to a broader audience interested in popular science when Schawlow published an article in Scientific American in 1961.

The name “optical maser” was initially used in technical literature, and also in Schawlow’s popular science article. However, “optical maser” had already been replaced by “laser” (light amplification by stimulated emission of radiation) when the Royal Swedish Academy of Sciences awarded the 1964 Nobel Prize in Physics to Townes, Nicolay G. Basov and Aleksandr M. Prokhorov “for fundamental work in the field of quantum electronics, which has led to the construction of oscillators and amplifiers based on the laser-maser principle”.

The field of laser physics and its applications grew rapidly after the first discoveries. Laser light has unique properties such as coherence, directionality, monochromaticity and intensity, which are very useful properties both in science and in everyday life. Clearly, in the early years of the laser, the principal driver was the desire to have a device that would generate light waves of the same purity as radio waves. The first lasers were operated in short bursts, but there was a need for continuous operation. The development of continuous-wave, frequency-sharp lasers was a prerequisite for high-resolution laser spectroscopy, which has generated several Nobel Prizes in Physics.

Another important development in laser physics was the production of short pulses of light, thanks in particular to the inventions of laser Q-switching and mode locking, which made it possible to produce a repetitive train of intense, short laser pulses. Together with the development of dye lasers, this set off a new direction towards shorter and shorter optical pulses. The access to short optical pulses, with durations matching the time-scale for atomic motion in molecules, led to new research fields in chemistry, and the possibility to study, in real time, transition states in chemical reactions. These breakthroughs were recognized by the Nobel Prize in Chemistry in 1999 to Ahmed Zewail.

This year’s Nobel Prize in Physics recognizes two inventions in laser physics that have opened new frontiers and generated important applications beneficial to the general public. One of them uses continuous, monochromatic lasers, whereas the other one concerns pulsed lasers.