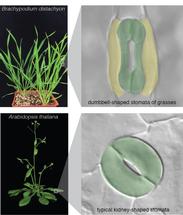 Plants have tiny pores on their leaves called stomata through which they take in carbon dioxide from the air and from which water evaporates. New work from the lab of Dominique Bergmann, honorary adjunct staff member at Carnegie's Department of Plant Biology and professor at Stanford University, reveals ways that the systems regulating the development of stomata in grasses could be harnessed to improve plant efficiency and agricultural yield.

More than 30 percent of all the carbon dioxide in the atmosphere passes through stomata each year, and in exchange, plant stomata release water vapor equivalent of twice the amount present in the whole atmosphere. As such, plants exert a tremendous push-and-pull influence on the global climate and are particularly attuned to climate change.

What's more, stomata have been found in fossils dating back 400 million years, and are features of nearly every land plant alive today, although they can take on different appearances in different kinds of plants. Most of what we know about how genes shape stomata comes from studies of one "model" plant, Arabidopsis, a relative of broccoli and cabbage, which is very different from the grasses studied here. It was a mystery whether all plants use the same genes as Arabidopsis to produce stomata, or whether all the different stomatal forms and patterns result from each plant using its own unique set of genetic blueprints.

New work published in Proceedings of the National Academy of Sciences by lead authors Michael Raissig and Emily Abrash features a collaboration born at Carnegie's Department of Plant Biology between Bergmann and John Vogel (now at the Department of Energy's Joint Genome Institute) who met as postdocs at Carnegie. This work focused on the stomata of grasses, a family that includes maize, rice, and wheat, and thus represents key species used for human food, animal feed, and for renewable fuel.

The decision to study stomata in grasses was made not just because these plants are economically and environmentally important, but because grasses show several unique innovations that make their stomata much more efficient in taking up carbon dioxide while limiting water loss. Grass stomata have a different shape -- a dumbbell -- instead of the kidney bean-shaped ones found in most plants, and grasses have their stomata all aligned in regimented rows along the leaf blade, as opposed to the more haphazard distribution on broad-leafed plants. Some scientists have speculated that the shape and distribution of stomata in grasses are the reason for their tremendous evolutionary success.

Using a variety of laboratory techniques, Bergmann's team was able to elucidate some parts of the regulatory systems that turn certain genes on and off, which determine how grasses control the number of stomata to make, where to put them, and how to generate their distinct shape. Surprisingly, these differences don't occur because grasses use unique stomata genes, but because they use the same genes as other plants in different ways. This can be thought of as similar circuits of components, but with different wiring, so different genes are in charge of others. This "rewiring" can partly explain how grasses form different stomata with superior physiology.

What is exciting about these findings is that "now we have a handle on the genes that comprise a universal toolkit for building stomata", Bergmann explained, "plants apparently use the same common parts, but the ways these parts function and interact with each other are different, which is both interesting from a discovery science perspective and could be harnessed to improve growth performance in grasses that humans use for food or fuel."