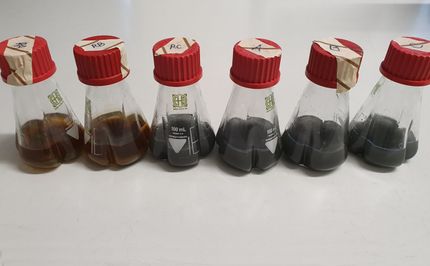 As part of the project "BioIntElekt" (Development of an innovative small-scale, low-energy electron beam source integrated in a bioreactor system, funding reference: 601015) funded by the Fraunhofer-Gesellschaft in an internal program, metals should be mobilized with the help of bacteria. At the Fraunhofer Institute for Organic Electronics, Electron Beam and Plasma Technology FEP, a new process for enhanced microbial ore leaching (bioleaching) is under development and initial successes were achieved. The institute will present the process principle at ACHEMA 2022, August 22–26, 2022, in Frankfurt/Main, Germany at the Fraunhofer joint booth no. A52 in hall 6.0.

Researchers are working on solution for the economical consumption of resources, their recycling and the future recovery of new raw material sources, as well as on an environmentally friendly but still demand-oriented extraction worldwide. The extraction of heavy metals from their ores with the help of microorganisms is called microbial ore leaching or bioleaching. At least since the mid-1800s, for example, copper has been leached from ores of the huge Rio Tinto deposit in southern Spain by microbiological processes. In this case, these naturally occurring processes take place in an uncontrolled manner.

Currently, bioleaching of copper in large-scale production is mostly performed by percolation in stockpiles. The mineral has to be crushed to a particle size of about 1 cm or smaller in two to three crushing stages. Diluted sulfuric acid solution is applied to the heaped material via dripping irrigation or sprinkling and the process has to be repeated until the desired copper concentration is achieved. The overall leaching process may last for several months.

To accelerate microbial ore leaching and to apply the process for a more efficient recovery of metals from tailings and waste, an interdisciplinary consortium has formed at Fraunhofer FEP, which has now received internal grant.

Over decades, the Fraunhofer FEP has built up expertise in the field of electron beam technology, the development of electron beam sources and application-specific adaptation. This know how is now transferred to biotechnological processes.

Dr. Simone Schopf, group manager of "Biotechnological Processes" at Fraunhofer FEP explains: "We are currently working on a lab-scale technology for the direct integration of an electron beam source into a bioreactor for the treatment of liquids. At the same time, we were able to run initial tests with an existing electron beam plant to proof the feasibility of the technology. Our results suggest that the interaction between electrons and bacteria can lead to stimulation. For example, in preliminary experiments we stimulated bacteria with low electron doses and achieved yields that were approximately 10% higher. The technology will be specifically developed for applications in the life science and environmental technology sectors."

Up to now, the treatment of liquids with electrons has been carried out with very thin liquids films with linear type accelerators. The production of such large linear type accelerators is not a problem. The challenges lie in the miniaturization of the electron beam source and the design of the interface to the bioreactor. However, direct and targeted introduction of the electrons into the liquid entails low energy losses and the cooling effect of the liquid can be used to beneficial effect.

Currently, the research focuses on bioleaching for the recovery of raw materials or as a recycling process. In addition to using the process for microbial ore leaching, the scientists also anticipate applications in wastewater treatment, sterilization applications, the food industry and the pharmaceutical industry. The process may also be of interest for the biotechnological production of natural substances or even "green" hydrogen in the future.

The aim of the Fraunhofer FEP is to collaborate with industrial partners to exploit novel future markets and to develop a technology that can be used to overcome the economic and social challenges of tomorrow. There is already great interest in the development.