It is WHIM syndrome, a disease caused by mutations in a cell membrane receptor. 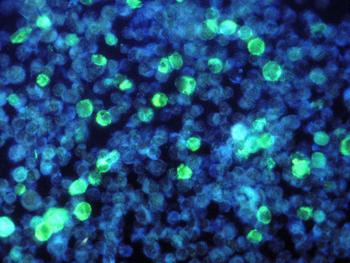 WHIM syndrome is caused by mutations in the CXCR4 gene.

WHIM syndrome is a congenital disease that causes severe immunodeficiency and increased infections, both bacterial and viral. This syndrome is caused by mutations in the CXCR4 gene, a receptor involved in cell adhesion and migration, among other functions, but until now it was unknown how these mutations affected its mechanism of action.

CSIC researchers, in collaboration with different national and European scientific groups, have identified the molecular mechanism responsible for this disease. The work, published in Proceedings of the National Academy of Sciences USA (PNAS), combines imaging techniques and bioinformatics analysis and demonstrates that mutations in CXCR4 affect its dynamics and organization in the cell membrane, which affects cell migration.

Mario Mellado, researcher at the National Center for Biotechnology (CNB-CSIC) and leader of the work explains that "severe immunodeficiency in these patients is caused by the retention in the bone marrow of immune cells such as mature neutrophils and other leukocytes. It is also associated with an increased risk of infections, and with a poor response to vaccination, as these patients produce few specific antibodies that also disappear rapidly."

In this study, using proteins with the mutations present in WHIM syndrome, it has been shown that, "when activated by its ligand, the mutant CXCR4 receptor has a different dynamic and organization in the cell membrane than the non-mutated receptor," points out Eva Mª García Cuesta, also a researcher at CNB-CSIC. "The functional consequence is that the cells are unable to move in response to the CXCL12 chemokine stimulus in a targeted manner. This would explain why, in these patients, the cells are unable to leave the bone marrow and generate an immune system that functions properly".

Cell movement plays a fundamental role in a multitude of physiological and pathological processes, including the development of the immune system and inflammatory diseases such as asthma, arthritis and the formation of metastases in tumor processes. This movement is governed by chemokines, a family of proteins that act as a "chemoattractant" guiding cell migration toward the source of the chemokine. Chemokine receptors accumulate in an area of the membrane called the advancing front and direct cell migration.

"In the case of WHIM syndrome, mutations in the CXCR4 receptor affect the formation of aggregates (clusters) in the cell membrane necessary to respond to the "call" of the chemokine CXCL12. This results in changes in the actin cytoskeleton, in which the β1-arrestin protein is involved, the cell loses its sense of orientation and ceases to follow the direction marked by the chemoattractant gradients" states José Miguel Rodríguez Frade of the CNB-CSIC.

These results identify new therapeutic targets for the development of compounds that enable cells to orient themselves towards the chemoattractant gradients and consequently develop a normal immune response in affected patients.