Gamma delta T cells as an approach for cancer immunotherapies 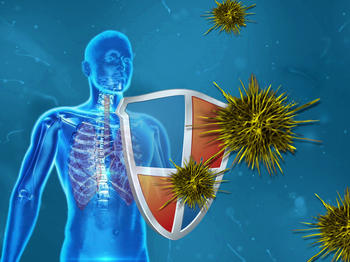 Under certain conditions, our immune system can efficiently fight off infectious diseases and cancer. T cells, especially the gamma delta T cell type, play an important role in this. The issue is that this cell type is extremely infrequent in the human body. Researchers at the University Hospital Tübingen, the University of Heidelberg and the European Molecular Biology Laboratory (EMBL) have now succeeded in finding the cause for the formation of these cell types. With these results, the research team intends to investigate new strategies for obtaining these cells, which may contribute to the research and development of new cancer immunotherapies in the future.

T cells are an important component of the body's immune system. They not only attack virus-infected and mutated body cells, but can also directly destroy them. This makes T cells particularly relevant for novel cancer therapy research. There are different types of T cells, the alpha beta (αβ) and gamma delta (γδ), which arise from precursor cells and are all specialized for a specific task. They develop in the thymus gland localized in the thorax. The gamma delta T cell plays an important role not only in stress surveillance but also in immunity against infectious diseases and cancer. On the other hand, alpha beta T cells play a crucial role in the adaptive immune response. In mice as well as in humans, only about five percent of the progenitor cells differentiate into gamma-delta T cells; in other animal species, this frequency increases up to 40 percent.

For more than three decades, immunologists and stem cell biologists have been trying to find out which factors influence this differentiation. A team of researchers led by Dr. Baubak Bajoghli of the Laboratory of Translational Oncology (head Prof. Dr. Julia Skokowa) at the University Hospital Tübingen, in collaboration with Prof. Dr. Maria Leptin of EMBL and Prof. Dr. Joachim Wittbrodt of the University of Heidelberg, has finally found an answer: They were able to uncover a possible cellular mechanism that controls the frequency of gamma delta T cells within a species. In doing so, the researchers found that progenitor cells who enter the thymus to differentiate as an alpha beta or gamma delta T cell lineage follow a different migration behavior – when, where and how they respond to signals from the thymic environment thus determines their further fate. "Therefore, it is important for progenitor cells to be in the right place at the right time to differentiate as gamma delta T cells," Dr. Bajoghli explains.

The ability to directly visualize all events associated with T cell development provides the researchers with valuable quantitative information about which genetic signatures link to the cells' migratory behavior during their differentiation. The research team used medaka fish embryos as a model organism because not only is T cell development in them similar to that in humans, but medaka also produce more gamma delta T cells in the thymus. In the past, the team was already able to establish this fish species as a particularly powerful model system with which it is possible to study the migration behavior of all developing T cells using confocal microscopy. Mouse models proved to be too technically demanding for this purpose.

To understand how the number and frequency of gamma delta T cells varies between species, they combined experimental research approaches with informatics and computer modeling. "With the computer model," says Bajoghli, "we can now directly test the limits of our knowledge of T cell development in healthy organisms and in states of disease."

Recent research has identified gamma delta T cells as attractive candidates for adoptive cancer cell immunotherapies. With the results of this study, the research group hopes to contribute to the development of new strategies for obtaining gamma delta T cells from patients. In addition, they plan to use the computer model to run scenarios for malignant transformation of developing T cells or to predict the outcomes of different therapeutic strategies against T cell leukemia.