How SARS-Coronaviruses reprogram the human cell to their own benefit

Other coronaviruses do not use this mechanism 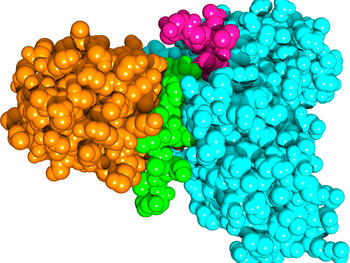 The SUD protein of SARS coronavirus (orange) forms a complex with the human protein Paip-1 (cyan). The elements of the two proteins that interact particularly strongly are colored green (SUD) and purple (Paip-1).

Coronavirus researchers under Prof. Rolf Hilgenfeld of the University of Lübeck and Dr. Albrecht von Brunn of the Ludwig-Maximilians University of Munich published a research breakthrough in the "EMBO Journal". They discovered how SARS viruses enhance the production of viral proteins in infected cells, so that many new copies of the virus can be generated. Other coronaviruses apart from SARS-CoV and SARS-CoV-2 do not use this mechanism, thereby providing a possible explanation for the much higher pathogenicity of the SARS viruses.

Coronaviruses causing harmless colds in humans have been known for more than 50 years. Emerging in 2002/2003, SARS coronavirus was the first coronavirus leading to se-vere pneumonia in infected people.
When comparing the RNA genomes of coronaviruses harmless for man and that of the SARS coronavirus, researchers identified a region that only occurred in the latter and was hence called "SARS-unique domain" (SUD). Such genomic regions and their protein products might be linked to the extraordinary pathogenicity of SARS coronavirus and its latest cousin, the COVID-19 virus SARS-CoV-2.

The research groups of Hilgenfeld and von Brunn showed that the SUD protein of these viruses interacts with a human protein called Paip-1, which in turn is involved in the first steps of protein synthesis. Along with Paip-1 and other proteins of the human cell, SUD apparently binds to the ribosomes, the protein synthesis factory of the host cell. This would lead to an enhancement of the production of all proteins, both those of the human cell and those of the virus.

However, in cells infected with SARS-CoV or SARS-CoV-2, the messenger RNA molecules that code for human proteins will be selectively destroyed by the virus, through a viral protein named Nsp1. As a consequence of this complicated process, the infected cell predominantly produces viral proteins, so that many new copies of the virus can be created.

Several years ago, the research group of Albrecht von Brunn had discovered the interac-tion between the proteins SUD and Paip-1. "Being an experienced coronavirologist, I knew that one has to inspect the special regions of the SARS coronavirus genome when trying to understand this virus", says Albrecht von Brunn.
The discovery of the Munich researchers was of high interest to Hilgenfeld, whose re-search group several years before had already elucidated the three-dimensional structure of the SUD protein. The two research groups teamed up. Dr. Jian Lei in Hilgenfeld's group, meanwhile group leader at Sichuan University in Chengdu (China), succeeded in crystalizing the complex of SUD and Paip-1 and in determining its three-dimensional structure by X-ray crystallography. And co-first author Dr. Yue "Lizzy" Ma-Lauer of von Brunn's group characterized the complex of the two proteins and its function by a multitude of cell-biological and biophysical methods.

"Interaction studies of this kind between coronavirus proteins and proteins of the infected human cell will help us understand how the viruses change key functions of the cell to their own benefit", says Hilgenfeld.