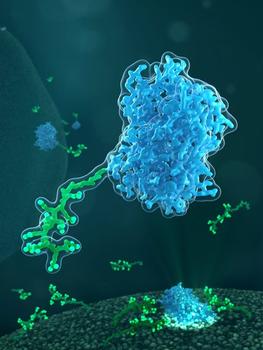 It is one of the big pharmacological questions: How do you get large functional biomolecules like proteins or antibodies into a living cell? Linking antibodies or proteins with cell-penetrating peptides is a promising approach—but it has not yet fully led to the anticipated results. Researchers from the Leibniz-Forschungsinstitut für Molekulare Pharmakologie (FMP) in Berlin and the TU Darmstadt present a new solution: If these peptides are also attached to the cell surface, then proteins or antibodies are transported much better into the cell interior. The groundbreaking results have just been published in the journal Nature Chemistry.

Our cell interior is protected from unwanted visitors by a cell membrane for a good reason. However, from a pharmacological point of view, this protection is a troublesome obstacle, as large proteins or antibodies find it difficult, if not impossible, to enter the so-called cytoplasm. Most drugs circumvent this barrier by targeting the cell surface. Meanwhile, making active ingredients cell-permeable remains one of the most pressing questions for biomedical research and the pharmaceutical industry.

Research into cell-penetrating peptides has been going on for more than two decades. This involves linking a protein or an antibody, for example, with a chemical or biochemical "tag" intended to facilitate its entry into the cell. But despite worldwide efforts, many of these approaches fail when it comes to transporting such large biomolecules.

Christian Hackenberger's group at the Leibniz-Forschungsinstitut für Molekulare Pharmakologie (FMP) in Berlin seeks to produce cell-permeable proteins and is collaborating closely with Dr. M. Cristina Cardoso of the Technical University of Darmstadt, a world-leading expert in the field of cell-penetrating peptides.

The research team from Berlin and Darmstadt has taken a decisive step toward transporting even large molecules into the cell interior. The key finding: the researchers link the molecules not only to the cell-penetrating peptides but also the cell surface. As experiments on living cells showed, this significantly improves the intracellular uptake of functional proteins and antibodies.

"Even though we are still a long way from the first medical applications, the work represents a real paradigm shift for the cellular transport of functional molecules," says a delighted Christian Hackenberger, head of the research group. "This is because we have been able to show on living cells that proteins and antibodies can not only pass through the cell membrane seemingly effortlessly but are also active in the cell without triggering toxicity."

The cargo is more easily cell-permeable

A decisive factor in this success is that the new method requires only about one-tenth of the substance concentrations as before. This simplifies the method significantly, making it more robust and versatile. "We can now reduce the concentrations to such an extent that the cargo can really reach the inside of the cell reliably," says the study’s first author Anselm Schneider, who recently completed his doctorate. "This was not possible before."

As part of his doctoral thesis, Anselm Schneider had the groundbreaking idea of equipping the cell surface with the same cell-penetrating peptides as the cargo intended to enter the cell. Together with Martin Lehmann, the head of the Microscopy Facility at the FMP, Schneider observed how the cell membrane was seemingly effortlessly overcome. "It is this synergy that now makes it possible to transport a whole range of molecules into the cell interior, which is a real breakthrough," says Schneider.

The potential applications of cellular molecular transport are broad. Active cell-permeable proteins or antibodies can be used, for example, to influence signaling pathways in a cancer cell deliberately or to switch off cancer-driving gene mutations. Likewise conceivable is the replacement of a missing enzyme in the case of a hereditary disease, for example, or the use of gene editing—that is, the genetic manipulation of cells using ready-made proteins equipped with additional properties. Clearly, the research team has a lot on the to-do list!