Sustainable and affordable: Using plant waste, air and light to produce an active substance against malaria 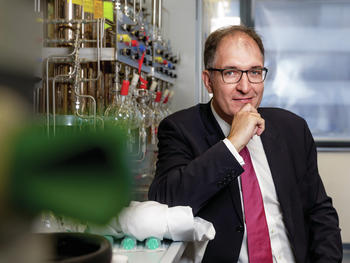 All the components needed to produce the active ingredient come from nature: chopped plant remains of sweet wormwood (Artemisia annua) serve as the starting material and the plant's own chlorophyll as the catalyst. Combined with oxygen and light, the active substance artemisinin is produced in the laboratory in less than 15 minutes. In nature, the sweet wormwood takes three weeks for this. "The chemical process we have developed is environmentally friendly and so efficient that we can work in a much more concentrated way than the nature we are mimicking here," says Peter H. Seeberger, Director of the Biomolecular Systems Department at the Max Planck Institute of Colloids and Interfaces in Potsdam. "In this way, affordable antimalarial drugs can be produced, and at the same time, our method opens up new possibilities for being able to produce other drugs sustainably and yet more cheaply than before," Seeberger adds.

About the research team

This is the third time that chemist and biochemist Professor Peter H. Seeberger has received an award from the American Chemical Society (ACS). The inventors of the method include chemist Professor Kerry Gilmore of the University of Connecticut, who until recently was a group leader at the Max Planck Institute of Colloids and Interfaces, and process engineer Professor Andreas Seidel-Morgenstern, director at the Max Planck Institute for Dynamics of Complex Technical Systems in Magdeburg.