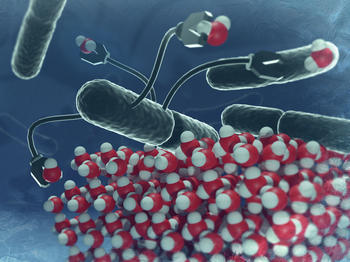 Because of mild winters, ski resorts produce artificial snow to supplement the natural snowfall or extend the ski-season. Ice-nucleating proteins, extracted from the bacterium Pseudomonas syringae, can make ice better than any other known material and are already used in snow making. Researchers from the Max Planck Institute for Polymer Research have now unraveled why an acidic environment can inhibit ice formation by these proteins.

Winters teach us that water freezes at approximately 0 ℃. However, very pure water freezes at much lower temperatures (around −37 ℃). Freezing at higher temperatures (close to 0 ℃) is supported by so-called “ice nucleators". These ice nucleators can be, for example, dust and soot particles or a special category of proteins － long chains of molecules containing amino acids, called ice-nucleating proteins.

Ice-nucleating proteins from the natural bacterium Pseudomonas syringae are the most efficient among the ice nucleators. Their ability to induce ice formation is well known and is commercially exploited for the production of artificial snow. However, these proteins have a dark origin: The bacterium is infamous for the deleterious effect － frostbites － it has on various crops. Acidic conditions are known to reduce the ability of these proteins to nucleate ice. The group of Konrad Meister, professor at the University of Alaska and group leader at the Max Planck Institute for Polymer Research in Mainz, Germany, has now gained a deeper insight into the physical processes behind this effect.

"The overall aim of this study was to understand the fundamental mechanisms behind bacterial ice nucleation. However, the possibility of selectively decreasing the ice nucleation ability of these bacteria has direct application potential” says Max Lukas, main author of the study. "It would, for instance, be great if this knowledge could be used to reduce crop losses caused by frostbites, not least for grapes － a very important culture and food product in and around Mainz."