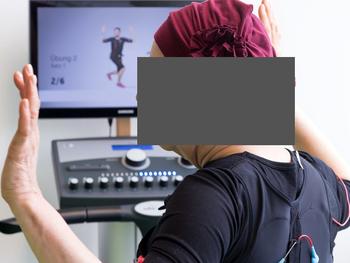 As well as having a positive effect on the body and mind, sport and exercise also appear to directly influence the onset and progress of cancer. A team of researchers at Universitätsklinikum Erlangen and Friedrich-Alexander-Universität Erlangen-Nürnberg (FAU) has demonstrated that anti-tumour mechanisms can also be activated by sport therapy in cancer patients at advanced stages of the disease.

When the skeletal muscle is stimulated, it releases myokines which are hormone-like substances. Myokines create an anti-inflammatory environment and transmit the positive effects of sport and exercise through the body. Researchers have already found that myokines induced through exercise influenced the growth of cancer cells in a study of healthy participants and early-stage cancer patients. FAU researchers have now shown for the first time that the non-invasive and effective training method of whole-body electromyostimulation produces myokines that prevent the growth of malignant tumour cells and promote cell death in patients with advanced cancer. During further studies, the researchers hope to identify which of the myokines have an anti-tumour effect to gain valuable insights into the development of multimodal cancer therapy.

In the current study, the research team at the Hector Centre for Nutrition, Exercise and Sport at the Department of Medicine 1– Gastroenterology, Pneumology and Endocrinology (Universitätsklinikum Erlangen) and the Chair of Internal Medicine I (FAU) directed by Prof. Dr. Yurdagül Zopf analysed blood samples from patients with advanced prostate or intestinal cancer, who had taken part in a 12-week sport and nutrition programme at the Hector Centre.