Are the high prices of cancer drugs justified?

Does the cost correspond to the particular drug’s effectiveness in combating the disease? 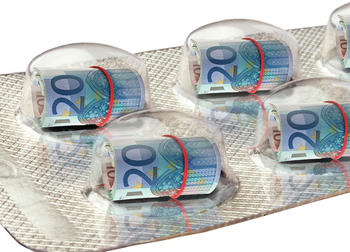 Rising prices for cancer drugs are driving up healthcare costs.

Do high prices of some cancer medicines have a higher benefit than those drugs with lower prices? An international UZH study has concluded that, in general, there is no correlation between costs of a cancer drugs and their clinical benefit. The researchers are therefore calling for the clinical benefit of drugs to be better reflected in pricing.

A growing number of new cancer drugs have come on the market in recent years, yet the cost of therapies in Europe and the United States have risen. This is driving up healthcare costs, which poses a challenge not only for the Swiss social insurance system, but for patients all over the world. But are the high prices of cancer drugs justified? Does the cost correspond to the particular drug’s effectiveness in combating the disease? An international research team from the University of Zurich and Harvard Medical School carried out a study to examine these questions.

The scientists – led by Kerstin Noëlle Vokinger, professor at UZH – analyzed the costs of cancer drugs in Switzerland, Germany, England, France and the United States. The prices of 65 new oncology drugs to treat solid tumors and various types of blood cancer were adjusted to calculate the monthly treatment costs for a standard patient.

In a second stage, the researchers investigated whether there is a link between monthly treatment costs and the clinical benefit of cancer drugs for solid tumors. The effectiveness of the drugs, which had been approved by the US and European licensing authorities (the FDA and EMA, respectively), was calculated using two well-established systems for evaluating the clinical benefit of cancer therapies: the American Society of Clinical Oncology Value Framework, and the European Society of Medical Oncology Magnitude of Clinical Benefit Scale.

No correlation between cost and benefit

“Our study clearly shows that, in general, for Switzerland, Germany, England and the United States, there is no association between clinical benefit of a cancer drugs and their prices,” explains lead author, Kerstin Vokinger. Only for France a correlation could be found based on one of the clinical benefit assessment systems. “It’s also clear that the prices of cancer drugs in the US are significantly higher than in the four European countries, with Americans paying on average approximately twice as much for the same drug.”

This is because drug pricing in the US is dictated by the free, unregulated market. In Europe, on the other hand, national authorities negotiate prices with manufacturers. From the European countries analyzed in the study, Switzerland has the second-highest prices after England, while the same drugs are cheaper in Germany and France. It must be kept in mind, however, that NHS England benefits from non-public discounts on certain drugs, so the actual prices may be lower than the official list prices.

Drug prices are not justified

“The pricing of cancer drugs is only partially justified. Drugs that are less effective should be cheaper than those with high efficacy,” the UZH professor says. “National authorities should take greater account of the clinical benefits of drugs when negotiating prices, and therapies that provide high clinical benefit should be prioritized in price negotiations.” Vokinger firmly believes that this is crucial in order to guarantee patients access to key cancer drugs since countries have only limited financial resources.