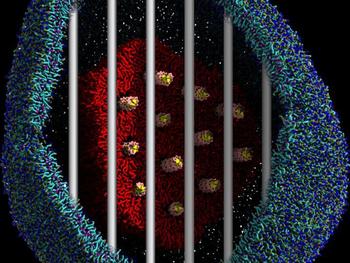 Visualization of a lipoplex entrapped inside an endosome. The DNA (yellow/pink rods) can only escape upon fusion of the lipoplex (red) with the endosomal membrane (blue).

Diseases with a genetic cause could, in theory, be treated by supplying a correct version of the faulty gene. However, in practice, delivering new genetic material to human cells is difficult. A promising method for the delivery of such genes involves the use of DNA/lipid complexes (lipoplexes). Scientists at the University of Groningen have now used advanced simulations to investigate how these lipoplexes deliver DNA fragments into cells. The results, which were published in the journal eLife, can be used to improve their efficiency.

The idea behind gene therapy is very simple: if a disease is caused by a particular version of a single gene, it could be cured by replacing this gene. For example, in cystic fibrosis, a mutation in the gene that codes for the cystic fibrosis transmembrane conductance regulator (CFTR) protein causes the disease. Replacing it in mucosal cells with a copy that does not carry the mutation could reverse this.

However, our bodies are very good at destroying foreign DNA, so delivering a new gene inside a cell is difficult. Viruses are very good at delivering genetic material into cells, but they can also trigger the body's defences, creating an immune response that can make the patient sick and that in rare cases has even proved lethal. That is why scientists are now experimenting with lipid-based complexes, which are similar to cell membranes.

'These lipoplexes are taken up by cells in a structure called an endosome,' explains Bart Bruininks, a PhD student in the group of Siewert-Jan Marrink, Professor of Molecular Dynamics at the University of Groningen. Bruininks is the first author on the eLife paper. 'The problem is that endosomes digest material, so the DNA needs to escape quickly,' he explains. The lipoplex can fuse with the endosome membrane, allowing the DNA to enter the cell. 'This should happen as efficiently as possible to prevent degradation. That is why we want to know exactly how the lipoplex and the endosome membrane interact.'

Studying this interaction through experiments is difficult. That is why Bruininks and his colleagues decided to simulate the interaction. 'Our group already has extensive experience in simulating membrane fusion.' Using a coarse grain molecular dynamics simulation, the fusion process between the lipoplex and the endosome membrane was visualized, as well as the subsequent escape of the DNA. 'These were very complex state-of-the-art simulations,' says Bruininks.

The lipoplex contains tiny water channels that contain the DNA. The lipids of the lipoplex fuse with the endosome's membrane. 'The lipids form a stalk-like connection and when both layers are fused, a pore opens up that connects the water channels to the cell's interior, allowing the DNA to escape,' says Bruininks. 'This picture of how the process works at the molecular level helps us to understand how to optimize it.' He predicts that poly-unsaturated fatty acids will speed up the fusion, allowing the DNA to escape into the cell's cytoplasm more quickly. 'This prediction could now be tested in the lab.'

Some diseases that are caused by an error in a gene could be cured by inserting a properly functioning gene into the cells. However, placing new genes inside human cells is difficult. Viruses are efficient in shuttling genes into cells, but they can cause a dangerous immune response. That is why scientists are interested in using liposome complexes (lipoplexes), which are similar to cell membranes, as gene carriers. Scientists at the University of Groningen have now used advanced computer simulations to investigate how lipoplexes enter the cell and how they release the genes that they carry into the cells. The results will help them to optimize this process.