New Vaccine Platform for a Vaccination against Hepatitis B 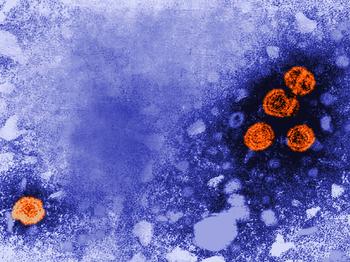 Scientists of the Paul-Ehrlich-Institut have researched a vaccine platform, which confers a very good immune response (B cell and T cell response) and protection against hepatitis B in the mouse model. The vaccine platform is based on virus-like particles (VLPs) of the hepatitis B virus. The VLPs were modified in such a way that they act as antigen carriers, and, in addition, permeate the cell membranes, thus being able to become distributed in the body. This created an effective protection against hepatitis B. The appropriate vaccine can possibly also be administrated orally or via the skin (using a plaster).

Around 257 million people worldwide are suffering from chronic liver infection, caused by the hepatitis B virus (HBV). HBV not only caused the liver infection but also liver cirrhosis and liver cancer. In many cases, insufficient immune defenses by particular immune cells (T cells) are the cause of development of the chronic infection. In the case of the vaccines against hepatitis authorised up to now, the protective effect is above all based on the formation of protective antibodies (B cell response).

Infections with emerging pathogens such as Ebola, Zika or corona virus frequently take on the extent of an epidemic. To make a vaccine against these pathogens available in a timely manner, too, scientists are working on so-called vaccine platforms This platform developed here is based on a carrier, which can be flexibly loaded with antigens of other pathogens, thus assuring a robust immune response against the cargo antigen derived from other pathogens. Vaccine platforms are currently considered as an important instrument, which can shorten the response time to emerging pathogens by making a specific vaccine available.

To achieve high efficacy, vaccines derived from such vaccine platforms in the best case both induce the formation of antibodies and confer a cellular immune response using so-called cytotoxic T-cells. Besides, it should ideally be possible to administrate the vaccine orally or transdermally (e.g. using a plaster).

The presented HBV-VLP vaccine platform researched by Tobias Zahn, Dr Sami Akhras, and colleagues in Division Virology of the Paul-Ehrlich-Institut (PEI) headed by Professor Eberhard Hildt could fulfil the conditions mentioned. The platform is based on virus-like particles (VLPs) of the hepatitis B virus. In concrete terms, the platform is a modified capsid of the virus. Capsids are regular structures from proteins serving to pack up the virus genome. The research team merged the capsid with a so-called TLM peptide (translocation motif) which allows it to permeate cell membranes and spread in the body. Through additional modifications, the researches integrated a charging site for the antigen, against which immune protection shall be developed. The researchers provided proof of cell permeability and distribution of the antigen in the entire organism by means of in vitro and in vivo methods (mouse model).

To research the efficacy of the platform, the research team charged the capsid with a surface antigen of the hepatitis B virus. The experimental vaccine thus created proved to be very efficacious in immunisation experiments with mice. The mice developed protective antibodies and, besides, a specific cellular immune response which led to the destruction of HBV positive cells. The latter could be particularly relevant for the development of a therapy against chronic infections. Besides, the membrane permeability of the vaccine candidate allowed needle-less administration of the vaccine, as it could be applied orally or transdermally (using a plaster).

"Our research results show that the new vaccine platform could have the potential of inducing an effective immune response both via the formation of antibodies and as a cellular immune response. Furthermore, the reason why the results are very promising is the fact that they point to the possibility of another syringe-free vaccination", as Professor Hildt explained the significance of the current research results.