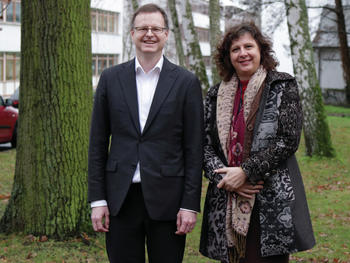 Holger Hoff and Zsuzsanna Izsvák work at the Campus in Berlin-Buch.

In an effort to optimize the Sleeping Beauty system, the MDCell – Helmholtz Innovation Lab is extending its collaboration with PlasmidFactory.

If you want to modify a human body’s immune cells – for example by giving them new vitality to fight a tumor or stop an autoimmune disease – you need safe and reliable tools. One such tool is the Sleeping Beauty system developed at the Max Delbrück Center for Molecular Medicine in the Helmholtz Association (MDC). The MDCell – Helmholtz Innovation Lab and the biopharmaceutical company PlasmidFactory have been working together to improve this system so that hospitals can use it in the future for gene therapy. Both partners have now decided to extend their collaboration for another two years.

“Sleeping Beauty 100x” is based on an element in the genome of fish that is probably 20 million years old. Known as a “jumping gene,” or transposon, it was able to copy itself and change positions within fish DNA. Transposons alter genetic identity and are thus considered one of the motors of evolution. Dr. Zsuzsanna Izsvák and her colleagues have woken this jumping gene from its deep evolutionary sleep, increased its activity a hundredfold and developed it for gene therapy. The “Sleeping Beauty” system can now introduce genes into the genome. According to Izsvák, it is safer, cheaper and more efficient than other methods.

The modified gene sequence does not need a virus, acting like a “taxi” (vector), to carry it to its destination. This obviates the disadvantages inherent in using viruses in gene therapy. Instead, the system is composed of two elements: the pT4 transposon – a circular DNA molecule (plasmid) into which the desired gene is inserted between two typical markers – and the genome of an enzyme named “SB100x,” which cuts the desired gene out of the plasmid and escorts it to the new site.

MDCell and PlasmidFactory are improving this system to make it safer for use in humans. One innovation is to copy the genome of the SB100x enzyme while it is still in the petri dish and to add it – in the form of in-vitro transcribed RNA (IVT RNA) – to the cells that are be modified. The pT4 transposon is also no longer a complete plasmid, as is often the case in bacteria. This led PlasmidFactory to develop a technique for creating a minicircle that, except for the necessary markers, is composed almost entirely of the gene that is to be inserted.

“The fact that the bacterial elements of the plasmids are missing is very important. It makes the SB100x transposon system even safer and more effective,” says Dr. Holger Hoff, the director of MDCell. “And PlasmidFactory produces minicircles of very high quality; this is because they are tightly woven together.”

Both parties bring extensive experience to the partnership. PlasmidFactory is the expert in designing and copying the “gene taxis” as well as in questions regarding patents and the approval process. “In our special laboratory in Bielefeld, we’re currently establishing methods to produce high-quality minicircle DNA for use in CAR T-cell therapy research,” explains Dr. Martin Schleef, CEO of PlasmidFactory. For its part, MDCell combines research conducted by various teams and partners from industry, develops processes and provides space and equipment. The goals of the partnership include using Sleeping Beauty to genetically modify immune cells so they will help sick people recover, and making the system ready for use in hospitals. For that to happen, it must not only be safe; it must be able to be produced in mass quantities of consistent quality. “We’re developing the corresponding guidelines for GMP facilities together,” says Hoff.

One possible application is a type of immunotherapy for cancer that is being studied, among others, by Professor Wolfgang Uckert’s research group. It would give T cells – the body’s police force – new weapons to identify tumors as foreign elements and destroy them. Another partnership, with Dr. Harald Prüß from the German Center for Neurogenerative Diseases (DZNE) as well as Charité – Universitätsmedizin Berlin, is trying to modify T cells so they will take certain antibodies out of circulation, thus neutralizing a dangerous autoimmune disease.

The disease causes brain inflammation (encephalitis) and always takes a similar course. Initially patients feel tired and have a low fever. Then they suffer from delusional thinking, inexplicable behavioral changes, anxiety and hallucinations – almost like at the onset of schizophrenia. Then they become passive and mute. Finally, they suffer epileptic seizures and blood pressure irregularities. Often the disease can only be treated by doctors at a neurological intensive care unit. The inflammation is caused by antibodies blocking NMDA receptors on the surface of nerve cells that would normally be used to transmit information. The name of the disease is “anti-NMDA receptor encephalitis.”

This is what killed Knut the polar bear, as Harald Prüß discovered in 2015 along with colleagues at the Leibniz Institute for Zoo and Wildlife Research in Berlin. But Prüß is more concerned with the fate of human patients. They are often put in psychiatric care as a result of their symptoms, but what they really need is treatment for their autoimmune disease.