Listening to the whispers of individual cells 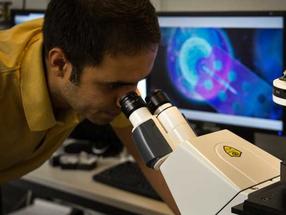 For the cells in our bodies to function as a unit, they must communicate with one another constantly. They secrete signalling molecules – ions, proteins and nucleic acids – that are picked up by adjacent cells, which in turn pass on the signal to other cells. Our muscles, digestive system and brain are only able to function thanks to this type of communication. And this is the only way in which our immune system can recognise pathogens or infected cells and react accordingly – again, by sending out signals to mobilise the immune defences. If something goes wrong with this signalling between cells, it can lead to diseases such as cancer or autoimmune disorders. “This is why it is important to research which signals the cells send out in which situations,” says Morteza Aramesh. The biophysicist, who works in the Laboratory of Biosensors and Bioelectronics at ETH Zurich, has developed a new method that does precisely that: it listens to communication between individual cells.

Although it has been possible to measure these signals in the past, it could only be done for entire populations of hundreds or thousands of cells. The methods were not sensitive enough to use on individual cells, meaning that the signalling molecules from individual cells were submerged into the average of the total cell population: “It was impossible to detect differences between cells in order to identify diseased cells, for instance,” says Aramesh.

The new method, which was recently published in the scientific journal Nature Nanotechnology, is different. Aramesh and his colleagues used what is known as a fluid force microscope, equipped with a special cantilever tip. A cantilever is a small lever arm with a fine tip that can be used with this type of microscope to scan surfaces – such as that of a cell. What is new is that a tiny sensor is placed on the tip of the cantilever. It consists of a silicon nitride pore just a few nanometres in size, which registers when a cell releases molecules.

How it works: transport proteins located in the cell membrane control how a cell releases the signalling molecules. The new nanopore sensor has such a small diameter that it can be positioned precisely over one of these transport proteins and thus intercept the molecules flowing through it. The nanopore sensor is able to measure the ionic current, which changes when ions or larger biomolecules, such as proteins or nucleic acids, flow through the pore. Different signalling molecules can then be identified depending on the nature and duration of the change in ionic current.

A close look at individual cells

The researchers have tested their method, which they call scanning nanopore microscopy, on live nerve cells from rat brain tissue. So far, they have been able to distinguish between individual signalling molecules, such as ions and certain proteins. The biophysicists now plan to develop their nanosensor further in order to identify other signalling molecules in the future. “Our goal is to ultimately be able to analyse all of a cell’s signals,” says János Vörös, Head of the Laboratory of Biosensors and Bioelectronics and last author of the publication. Nonetheless, the method can already be used to localise transport proteins in a living cell.

Moreover, the newly-developed sensor has allowed the researchers to look inside cells as well, since the tip of the nanosensor is so delicate that it can puncture the cell membrane without permanent damage. Inside the cell, it is then possible to analyse what is eliminated from the cell nucleus. “RNA fragments are of particular interest here,” says Vörös. They provide insight into which proteins a cell is currently producing – a key factor in the onset of many diseases.

“Our method offers biologists completely new ways of investigating the behaviour of individual cells,” adds Vörös. It can not only differentiate between diseased and healthy cells, but can also be used in the development of stem cells or to determine whether cells in the lab behave in the same way as in the body. The new method is likely to help answer many other questions in the future.