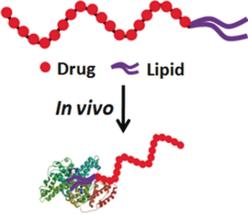 How can elimination of therapeutics from the bloodstream or their early enzymatic degradation be avoided in systemic delivery? Chinese scientists have new developed a method to bind an established cancer therapeutic, floxuridine, with natural serum albumin for its transport and delivery to target cancer cells. In the journal Angewandte Chemie, the authors demonstrate the automated synthesis of a conjugated floxuridine polymer, its successful transport and delivery, and its efficiency in stopping tumor growth.

How can we get a drug to its target? Despite much progress in nanocarrier research, the problem is still persistent, especially in cancer therapy. During transport in the bloodstream, the anticancer drugs may interfere with healthy cells, or they may be degraded by enzymes or eliminated from the body before entering the tumor tissue. Envisaging a natural and safe carrier system, Weihong Tan and colleagues at Hunan University, China, and the University of Florida, USA, chose endogeneous serum albumin as a possible nanotransporter. To ensure binding of the antimetabolite floxuridine to albumin, they had to modify it.

Floxuridine is a fluorinated pyrimidine nucleoside and antimetabolite, which inhibits the enzymes of DNA synthesis. Its oligomer, an oligonucleotide of 10 units, is even more efficient and is actively internalized in the cell. To make it transportable by serum albumin, Prof. Tan and his group decided to endow the oligonucleotide with hydrophobic alkyl chains as a linker. This was necessary because albumin naturally transports lipophilic molecules such as lipids and cholesterol, but not negatively charged oligonucleotides.

The synthesis of the alkyl-chain-conjugated floxuridine oligonucleotide containing 20 units (LFU20) proceeded on a DNA synthesizer. The authors tested the compound for its interaction with serum albumin, cell internalization, transport through the bloodstream in tumor-implanted mice, and tumor proliferation. They observed that although a large fraction of the drug still left the body, a much higher proportion than in the control group accumulated in the tumor. There, the drug was internalized in the cells. The “enhanced permeability and retention effect” directed the accumulation, an effect well established in tumor research. In the cells, the lysosomes take up the drug, and enzymes release the antimetabolic floxuridine structure, the authors note.

The scientists reported that tumor proliferation was halted by the lipid-conjugated compound, whereas the free FU20 drug without lipid anchor could not stop tumor growth. This means that LFU20 appears to “hitchhike” with albumin to find the target cells and accumulate therein. The authors also pointed out that the drug is easily prepared by automated synthesis, and the hydrophobic lipid tail, which ensures the albumin affinity, can be readily incorporated at the 5’-terminus of the oligonucleotide. Hitchhiking with killing potential pays off in drug delivery.