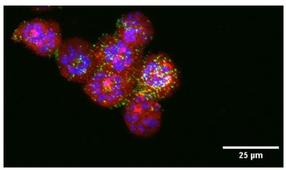 Tumor-targeting nanoparticles loaded with a drug that makes cancer cells more vulnerable to chemotherapy's toxicity could be used to treat an aggressive and often deadly form of endometrial cancer, according to new research by the University of Iowa College of Pharmacy.

For the first time, researchers combined traditional chemotherapy with a relatively new cancer drug that attacks chemo-resistant tumor cells, loaded both into tiny nanoparticles, and created an extremely selective and lethal cancer treatment.

The new treatment could mean improved survival rates for the roughly 6,000 U.S. women diagnosed with type II endometrial cancer every year and also represents an important step in the development of targeted cancer therapies. In contrast to chemotherapy, the current standard in cancer treatment that exposes the entire body to anti-cancer drugs, targeted treatments deliver drugs directly to the tumor site, thereby protecting healthy tissue and organs and enhancing drug efficacy.

"In this particular study, we took on one of the biggest challenges in cancer research, which is tumor targeting," said Kareem Ebeid, a UI pharmacy science graduate student and lead researcher on the study. "And for the first time, we were able to combine two different tumor-targeting strategies and use them to defeat deadly type II endometrial cancer. We believe this treatment could be used to fight other cancers, as well."

In their effort to create a highly selective cancer treatment, Ebeid and his team started with tiny nanoparticles. In recent years, there has been increased interest in using nanoparticles to treat cancer, in large part because of their small size. Tumors grow quickly, and the blood vessels they create to feed their growth are defective and full of holes. Nanoparticles are small enough to slip through the holes, thereby allowing them to specifically target tumors.

Researchers then fueled the nanoparticles with two anti-cancer drugs: paclitaxel, a type of chemotherapy used to treat endometrial cancer, and nintedanib, or BIBF 1120, a relatively new drug used to restrict tumor blood vessel growth. However, in the UI study, the drug was used for a different purpose. Besides limiting blood vessel growth, nintedanib also targets tumor cells with a specific mutation. The mutation, known as Loss of Function p53, interrupts the normal life cycle of tumor cells and makes them more resistant to the lethal effects of chemotherapy.

Chemotherapy kills cells when they are in the process of mitosis, or cell division, and tumor cells with the Loss of Function p53 mutation often are stuck in a limbo state that slows this process. Cancers that are resistant to chemotherapy are much harder to treat and have less favorable outcomes.

Nintedanib attacks tumor cells with the Loss of Function p53 mutation and compels them to enter mitosis and divide, at which point they are more easily killed by chemotherapy. Ebeid says this is the first time that researchers have used nintedanib to force tumor cells into mitosis and kill them--a phenomenon scientists refer to as "synthetic lethality."

"Basically, we are taking advantage of the tumor cells' Achilles heel--the Loss of Function mutation--and then sweeping in and killing them with chemotherapy," Ebeid says. "We call this a synthetically lethal situation because we are creating the right conditions for massive cell death."

The treatment--and cellular death that it incites--could be used to treat other cancers as well, including types of ovarian and lung cancers that also carry the Loss of Function p53 mutation.

"We believe our research could have a positive impact beyond the treatment of endometrial cancer," says Aliasger K. Salem, professor of pharmaceutical sciences at the UI and corresponding author on the study. "We hope that since the drugs used in our study have already been approved for clinical use, we will be able to begin working with patients soon."

"For two decades, the standard therapy for type II endometrial cancer has been chemotherapy and radiation," says Kimberly K. Leslie, professor and chair of the Department of Obstetrics and Gynecology at the UI Roy J. and Lucille A. Carver College of Medicine. "The possibility of a new treatment that is both highly selective and highly effective is incredibly exciting."