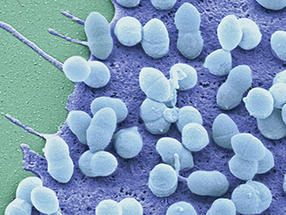 The incidence of chronic inflammatory lung diseases is on the rise throughout the world. According to the World Health Organization (WHO), they will become the third leading cause of death worldwide by 2030. So far, there is no reliable therapy, which only reflects the fact that the underlying mechanisms of the disease etiology are not fully understood yet. Researchers from the Helmholtz Centre for Infection Research (HZI) and the Otto von Guericke University Magdeburg are therefore studying lung inflammation in mice and have made an interesting discovery: In chronically inflamed lungs, there is increased transport of protective antibodies onto the lung mucosa, where they protect the lung from hazardous pathogens better than is the case in a healthy lung. Many lung patients may benefit from this insight in the long-term.

Chronic bronchitis, sarcoidosis and pulmonary emphysema have one thing in common: The afflicted patients suffer from chronic lung symptoms. The causes differ quite widely and range from extensive smoking and fine dust-laden air to the intensive exposure to open fires, e.g. while cooking daily meals, which is the case for more than half of the population of the world. "In many cases, this leads to progressive destruction of the lung tissue for which medicine has no remedy at this time," says Prof Dunja Bruder from the Institute for Medical Microbiology and Hospital Hygiene of the Otto von Guericke University Magdeburg. Bruder is also the head of the "Immune Regulation" research group at the HZI.

The pre-damaged lung tissue often no longer provides effective protection from pathogens such that afflicted patients become particularly sensitive to these sometimes life-threatening respiratory infections. "However, there is another group of lung patients that don't seem to be afflicted by these infections at all. These individuals appear to be better protected despite their chronic lung disease," says Bruder.

Dr Julia Boehme, a scientist in Bruder's laboratory, may have detected the cause of this phenomenon. She studied mice with chronic lung inflammation, focusing on the soluble components of the lung mucosa. These investigations were conducted in close cooperation with the "Cellular Proteome Research" group of Prof Lothar Jänsch at the HZI. "In these mice, we found the concentration of secretory antibodies on the mucosa of the lung to be much higher than in healthy animals," says Boehme.

The so-called natural antibodies are special in that they bind to a broad range of pathogens before these pathogens can exert their harmful effects and invade the body. In fact, it was found that mice with lung diseases have an increased level of protection with respect to infection by Streptococcus pneumoniae, one of the major bacterial respiratory pathogens. In search of the cause for this phenomenon, the scientists made an interesting finding regarding the reason of the augmented immune defense in the lung. "Our experiments revealed that a certain transport protein called pIgR (polymeric immunoglobulin receptor) is produced at elevated levels by the epithelial cells in the inflamed lung. This protein is known to transport secretory antibodies from the lung tissue into the pulmonary alveoli," says Boehme. This means that the scientists found more protective antibodies in mice with chronic inflammation of the lung right at the place at which many pathogens attempt to invade the body.

The chronic inflammation of the lung appears to be responsible for the increased production of the antibody transporter pIgR. The researchers hypothesize this molecule to be one probable mechanism involved in the riddle of these two patient groups. "It is possible that the extent of the production of this transport protein on the mucosa of the lung is the difference between the two patient groups," says Dr Andreas Jeron, who also is a scientist in Bruder's laboratory and a contributor of the study. "Maybe one group of patients can combat infections through an elevated level of antibody protection on the mucosa of their lungs, whereas the other group is unprotected.“

But Dunja Bruder also warns against over-generalization: "The difficulty is that each patient needs to be examined individually. One of the factors to be considered is the severity of the chronic inflammation of the lung. Presumably, a relatively mild inflammation of the lung provides better protection from infection, whereas more serious courses of the disease no longer have this effect."

The researchers now want to find out in future experiments if the production of pIgR, and therefore the transport of antibodies into the pulmonary alveoli, can be increased therapeutically by specific treatments. Although this would not mitigate the pre-existing lung inflammation, it may confer prophylactic protection against various respiratory pathogens to many patients.