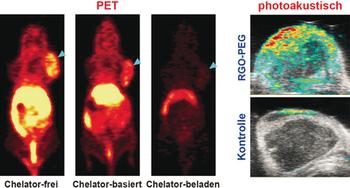 Positron emission tomography plays a pivotal role for monitoring the distribution and accumulation of radiolabeled nanomaterials in living subjects. The radioactive metals are usually connected to the nanomaterial through an anchor, a so-called chelator, but this chemical binding can be omitted if nanographene is used, as scientists report. The replacement of chelator-based labeling by intrinsic labeling significantly enhances the bioimaging accuracy and reduces biases.

Nanoparticles are very promising substances for biodiagnostics (e.g., detecting cancerous tissue) and biotherapy (e.g., destroying tumors by molecular agents), because they are not as fast metabolized as normal pharmaceuticals and they particularly enrich in tumors through an effect called enhanced permeability and retention (EPR). Chelators, which have a macrocyclic structure, are used to anchor the radioactive element (e.g., copper-64) onto the nanoparticles' surface. The tracers are then detected and localized in the body with the help of a positron emission tomography (PET) scanner. However, the use of a chelator can also be problematic, because it can detach from the nanoparticles or bias the imaging. Therefore, the group of Weibo Cai at University of Wisconsin-Madison, USA, sought for chelator-free solutions--and found it in nanographene, one of the most promising substances in nanotechnology.

Nanographene offers the electronic system to provide special binding electrons for some transition metal ions. "π bonds of nanographene are able to provide the additional electron to stably incorporate the (64)Cu(2+) acceptor ions onto the surface of graphene," the authors wrote. Thus, it was possible to directly and stably attach the copper isotope to reduced graphene oxide nanomaterials stabilized by poly(ethylene glycol) (PEG), and this system was used for several bioimaging tests including the detection of tumors in mice.

After injection in the mouse model, the scientists observed long blood circulation and high tumor uptake. "Prolonged blood circulation of (64)Cu-RGO-PEG [...] induced a prompt and persistent tumor uptake via EPR effect," they wrote. Moreover, the directly radiolabeled nanographene was readily prepared by simply mixing both components and heating them. This simple chelator-free, intrinsically labeled system may provide an attractive alternative to the chelator-based radiolabeling, which is still the "gold standard" in bioimaging.