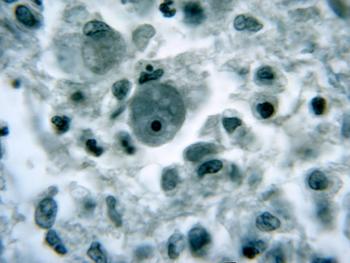 Halloween is just around the corner, and some people will celebrate by watching scary movies about brain-eating zombies. But even more frightening are real-life parasites that feed on the human brain, and they can be harder to kill than their horror-movie counterparts. Now, researchers have developed silver nanoparticles coated with anti-seizure drugs that can kill brain-eating amoebae while sparing human cells.

Although infections with brain-eating amoebae (Naegleria fowleri) are rare, they are almost always deadly. Most cases result from inhaling warm, dirty water in ponds, hot springs or unchlorinated swimming pools. Another species, Acanthamoeba castellanii, can cause blindness by entering the eyes through dirty contact lenses. Common treatments include antimicrobial drugs, but they often cause severe side effects because of the high doses required for them to enter the brain. Ayaz Anwar and colleagues wondered if three anti-seizure drugs -- diazepam, phenobarbitone and phenytoin -- could kill amoebae, alone or in combination with silver nanoparticles. The drugs are already approved by the U.S. Food and Drug Administration and are known to cross the blood-brain barrier. The researchers reasoned that they might be more effective when attached to silver nanoparticles, which can improve the delivery of some drugs and also have their own antimicrobial effects.

The team chemically attached the drugs to silver nanoparticles and examined their ability to kill amoebae. They found that each of the three drugs alone could kill N. fowleri and A. castellanii, but they worked much better when bound to silver nanoparticles. The drug-nanoparticle combos protected human cells from the microbes, increasing their survival rate compared with untreated infected human cells. The researchers propose that these repurposed drugs, aided by the nanoparticles, might kill amoebae by binding to protein receptors or ion channels on the single-celled organism's membrane.