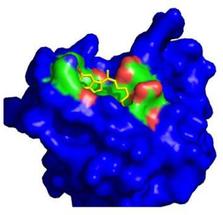 Dr. Reeder Robinson of the Medical University of South Carolina

This is the theoretical binding of lead drug candidate to its molecular target, protein disulfide isomerase.

In an article Medical University of South Carolina investigators report that a new compound enhances the efficacy of proteasome inhibitors (PIs), the standard-of-care for the treatment of multiple myeloma (MM), in cell culture and in preclinical models. The efficacy and safety of the novel combination regimen will need to be validated in humans, but preclinical findings are promising and suggest that it could help overcome PI resistance in MM.

Most patients with MM eventually develop resistance to PIs. To address this problem, the MUSC team began by screening thousands of compounds in hopes of finding one that, when combined with PIs, could synergistically kill PI-resistant myeloma cells. The team was led by Nathan G. Dolloff, Ph.D., an assistant professor in the Department of Cell and Molecular Pharmacology & Experimental Therapeutics and a member of Hollings Cancer Center at MUSC. The team identified a molecule, compound E61, that amplified the effects of several FDA-approved PIs in resistant MM cells. Interestingly, it did not kill more normal cells, showing that the drug was selective for malignant cells. The new molecule, by itself and in combination with the PI bortezomib, also significantly prolonged median survival in a mouse model, a striking result for a compound that had not yet been chemically modified.

The team then began a structure activity relationship (SAR) program, making and testing hundreds of new E61 derivatives. SAR studies enable investigators to examine which parts of the molecule are essential for activity and guide them to improve a compound by giving it better potency and drug-like properties. These studies led to the development of the lead candidate, called E64FC26. The team then went on to evaluate the pharmacological properties of its new lead and show activity in multiple mouse models of MM. Compared to mice that received no drug treatment or just a single-agent PI, the combination of E64FC26 and the PI extended survival the most.

"One of the more compelling aspects of our study was showing the compound works in combination with PIs in vivo," said Reeder M. Robinson, Ph.D., a postdoctoral fellow in the Dolloff laboratory and first author on the Leukemia article. "A new drug can work really well on cancer cells in a dish, but there's a lot of things that can go wrong and cause it to be ineffective when you test it in mice."

MM is a cancer of the plasma cell, a type of white blood cell that resides in our bone marrow and produces antibodies that help the immune system fight off infection. Cancerous MM plasma cells produce and secrete high levels of antibody proteins, making them vulnerable to disturbances in protein balance. This is one of the reasons why PIs are believed to work so well in MM. The proteasome functions as a molecular garbage disposal in cells, breaking down excess proteins, or proteins that are misfolded due to synthesis errors or damaged by cellular stress. Treatment with a PI blocks this important job and leads to the build-up of dysfunctional proteins, an effect that is highly toxic to MM plasma cells due to their high protein production rates. However, MM cells eventually adapt to the treatment and develop resistance through a variety of mechanisms.

Compound E61 rendered resistant MM cells vulnerable to PIs, but at first the team did not know why. To identify the compound's molecular target, it used "click" chemistry and peptide mass fingerprinting, which allowed them to label E61 and then fish out the specific proteins to which it was binding. The primary targets of E61 were a group of proteins called protein disulfide isomerases (PDIs). PDIs are important for the proper folding of newly synthesized proteins, and the group showed that the major effect of its compounds was in fact the accumulation misfolded proteins and the activation of the unfolded protein response stress pathway. Under normal circumstances, misfolded proteins would be sent to the proteasome for degradation, but the combination with a PI blocked this process, leading to the strong synergy observed between the two classes of drug. PDI is an emerging drug target for the treatment of cancer and other diseases. PDI inhibitors have been reported previously; however, none has advanced to clinical trials due to a variety of limitations.

"PDI is an attractive target in oncology, but good PDI inhibitors have been hard to find. The compounds we discovered have a lot of advantages, including high potency and good drug-like properties. We hope that those strengths translate into an effective new drug that can ultimately help patients," said Dolloff.

Next steps in the project are to complete the optimization and preclinical development of lead compound E64FC26 with the goal of beginning clinical trials in MM. Other near-term objectives include studies to characterize the precise binding mode of E64FC26 to PDIs, as this will likely offer key insight into the druggability of PDIs. Better understanding how E64FC26 binds to its target will make it easier to optimize the molecule and to develop an even more potent and specific clinical drug candidate.

"One of the strengths of this study is that we spanned almost the entire drug discovery process," said Dolloff. "We screened thousands of compounds, found an exciting molecule, deconvoluted what its binding target was, synthesized hundreds of derivatives to make it better and then conducted animal studies. The study has everything from biochemistry and cell biology to medicinal chemistry and animal pharmacology in it. There is still a lot of work to be done before this drug is ready for clinical trials in humans, but it has been a rewarding project, and I'm looking forward to the next steps."