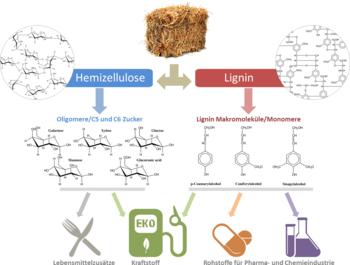 Schematic overview of 2nd generation bio refining. Production of biofuel from straw after enzymatic hydrolysis of hemicellulose and lignin followed by the conversion of the by-products into valuable substances for pharma, chemical and food industry.

What should we run our cars with in the future? The need for an alternative to fossil fuels is an issue that is elaborated heatedly all over the world.

At present, one option is using biofuels. However, the so-called first-generation technology depends widely on sugar, starch or oil crops. These, however, compete with food crops for land and water usage. Research is now working on using plant materials such as straw or soft woods to produce bioenergy. The goal of this new bio refinery generation is the utilization of the whole plant substrate by valorizing by-products of the process. This second-generation technology avoids competing for land.

The European Valor Plus project has the aim to enhance the whole process of biofuel production. The key aspect was the improvement of the by-product utilization and transformation into high value compounds. By using enzymatic degradation of hemicellulose and lignin, the project’s approach might be an ecologically and economically more beneficial approach than the standard chemical degradation.

The five main tasks in this research project are:

KNAUER is one of 15 European research and industry partners in this project. As a well-established producer of HPLC systems and columns KNAUER contributes with its expertise in several task of the project.

After hydrolysis of hemicellulose via enzymatic reactions into mono-, di-, and oligosaccharides the goal is to purify oligosaccharides with high yield and purity for the next project tasks. KNAUER is developing optimized purification strategies via batch or multicolumn solutions to provide the desired product to the various partners.

In the second work package lignin is depolymerized into smaller compounds by chemo-enzymatic approaches. With KNAUER technology, specific and valuable lignin compounds are purified for usage in chemical or pharmaceutical industry.

The European Valor Plus project runs until 2017 with the aim to optimize the recovery of bio refinery products out of feedstocks such as straw. Besides the quest to improve the production process, the big question remains, if straw can really be turned into “gold”: Is it possible to produce bio refinery products profitably on a large scale?

This project has received funding from the European Union's Seventh Framework Program for research, technological development and demonstration under grant agreement no FP7-KBBE-2013-7-613802.