'Dominating' fungus could be solution to producing more biofuels and chemicals 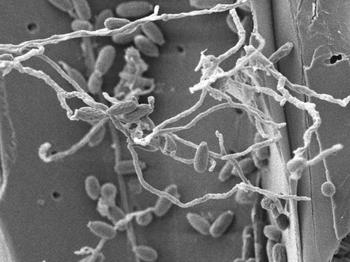 The discovery of a novel enzyme that releases a valuable chemical from agricultural waste could provide an important breakthrough in the upscaling of renewable fuels and chemicals, a new study shows.

Lignocellulose is found in forestry and agricultural waste like wheat straw, which was used in this research. It has long been considered by scientists that this dry matter could be used as a sustainable resource for the production of fuels and chemicals if a way to break it down could be found so that it can be processed effectively.

Professor Neil Bruce from the Department of Biology and Director of the Centre for Novel Agricultural Products (CNAP) said: "We believe this discovery is important as there is much interest in using lignocellulose as renewable and sustainable resource for the production of liquid fuels and chemicals.

"Although lignocellulose is one of the most abundant forms of fixed carbon in the biosphere, the use of lignocellulose as a material to supply bioindustry has been hampered by its composition and structure, which renders it highly obstinate to degradation.

"This is, in part, due to the presence of lignin, a complex aromatic polymer that encases the structure to block enzyme accessibility."

There are currently no industrial biocatalytic processes for breaking down lignin.

But researchers found that an enzyme produced by a fungus called, Parascedosporium putredinis NO1, can break through the lignin to begin the essential process of degradation needed to ultimately produce biofuels.

Professor Bruce added: "P. putredinis NO1 is able to dominate cultures in the latter stages of wheat straw degradation in a mixed microbial community when easily accessible polysaccharides have been exhausted.

"We demonstrate that treatments with this enzyme can increase the digestibility of lignocellulosic biomass, offering the possibility of producing a valuable product from lignin while decreasing processing costs."