Live broadcast from inside the nerve cell 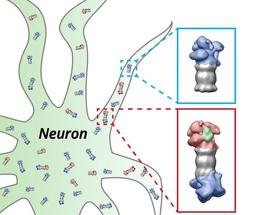 The proteasomes (grey) of the nerve cell (neuron) are equipped with the regulatory particles at their ends. These structures change their shape depending on whether they have bound (red) proteins which have to be degraded (green) or not (blue).

Scientists estimate that our brain consists of about ten to one hundred billions of nerve cells. In order to fulfill their respective tasks as long as possible, these cells have to constantly control their internal proteins with regard to quality and functionality. Otherwise the proteins might clump together and thereby paralyze or even kill the cells. Once the cell recognizes a defect protein, this is marked for degradation and a kind of a molecular shredder, the so-called proteasome, chops it into pieces that are eventually recycled.

For the first time now, researchers have succeeded in visualizing this process in intact nerve cells, which previously could only be investigated in the test tube. Electron cryo-tomography was essential for obtaining the described images. Hereby, cells are cooled down to minus 170°C in a fraction of a second. In a consecutive step, pictures of the interior of the cells are taken from many different angles, which then are merged computationally into a three-dimensional image.

In the current study, the use of specific technical innovations allowed the researchers to achieve a unprecedented imaging quality, enabling them to distinguish single proteasomes within the cell. "For the first time it is possible to qualitatively and quantitatively describe this important enzyme complex in intact cells", Asano classifies the results.

In the following experiments, the scientists focused on the activity of the proteasomes. For the interpretation of the single particles it is important to know that there are cap-like structures, the so-called regulatory particles, attached to the ends of proteasomes (see picture). They bind proteins that are designated to be degraded and thereby change their shape. The scientists were able to distinguish these states and consequently could deduce how many of the proteasomes were actively degrading proteins.

New prospects for the future

The conclusion of the researchers: in quiescent nerve cells like the ones used in the actual experiments, only a minority of the proteasomes is active. In detail, the results showed that only every fourth proteasome was actively degrading proteins while the rest idled at the same time. In the future, the scientists want to address the structural changes of the proteasomes under cellular stress as it occurs in neurodegenerative diseases. "This study shows the new possibilities to resolve protein complexes in their entirety in the cell and to study their mutual functional dependencies," Wolfgang Baumeister, head of the study, determines the agenda for the future.