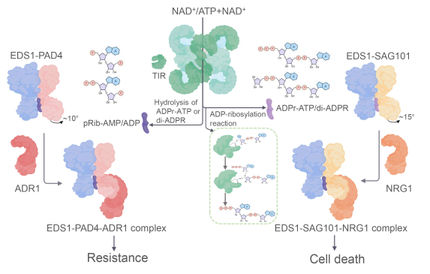 Two studies published in the journal Science by researchers at the Max Planck Institute for Plant Breeding Research in Cologne, Germany in collaboration with colleagues in China have discovered natural cellular molecules that drive critical plant immune responses. These compounds have all the hallmarks of being small messengers tailored by plants to turn on key defense-control hubs. Harnessing these insights may allow scientists and plant breeders to design molecules that make plants, including many important crop species, more resistant to disease.

World food production must double by 2050 in order to feed the anticipated extra 2 billion people living on earth by then. Boosting food production requires increases in the yields of many of our staple crops. To do so, strategies need to be in place to ensure that we can make plants more resistant to microscopic infectious agents, whilst also ensuring that food production is environmentally safe. Achieving this, in turn, requires a detailed understanding of the plant immune system – the defenses that plants mount when confronted with invading microorganisms. Now, in two landmark studies, scientists led by Jijie Chai and Jane Parker from the Max Planck Institute for Plant Breeding Research in Cologne and the University of Cologne, Germany, collaborating with Junbiao Chang’s group at Zhengzhou University in Zhengzhou and Zhifu Han and colleagues at Tsinghua University in Beijing, China, have identified two classes of molecules and determined their modes of action in mediating immune responses inside plant cells. Their findings pave the way for the design of bioactive small molecules that could allow researchers and plant growers to manipulate – and thereby boost – plant resistance against harmful microbes.

At a molecular level, a main immune strategy employed by plants involves proteins called nucleotide-binding leucine-rich repeat receptors, or NLRs for short. NLRs are activated by invading microorganisms and set in motion protective immune responses. These immune responses culminate in the so-called hypersensitive response, which involves restriction of pathogen growth and often strictly demarcated death of cells at the site of infection – akin to amputating a toe to ensure survival of the body.

One class of NLR proteins, those with so-called toll/interleukin-1 receptor (TIR) domains, which are termed TIR-NLRs (or TNLs), have been shown to relay signals to the downstream immune protein Enhanced Disease Susceptibility 1 (EDS1). Smaller TIR-containing proteins also feed signals into EDS1 to potentiate disease resistance. EDS1 functions as a control hub which, depending on the types of other proteins it interacts with, pushes plant cells to restrict pathogen growth or commit to cell death. Earlier work showed that TNL receptors and TIR proteins are actually pathogen-induced enzymes. Evidence suggested that these TIR enzymes produce a small messenger or messenger(s) that signal to EDS1 inside cells. However, the identities of the precise molecules generated by TNLs or TIRs that stimulate the different immune responses have remained elusive.

Parker and colleagues established that the two functional EDS1 modules leading to immunity or cell death can be triggered by pathogen-activated TNL enzymes inside plant cells. To identify the small molecules produced by TNLs or TIRs and that act upon EDS1, the Chai group reconstituted key components of the signaling pathway in insect cells, a system that allows production and purification of high amounts of molecules which can then be isolated and characterized. Using this approach, the authors discovered two different classes of modified nucleotide molecules produced by TNLs and TIRs. These compounds preferentially bound to and activated differentEDS1 sub-complexes. Hence, the authors demonstrate that different EDS1 sub-complexes recognize particular TIR-produced molecules, which function as information-carrying chemicals, to promote immune responses.

The TIR immune receptors and EDS1 hub proteins exist in many important crop species, such as rice and wheat, and Jijie Chai points out that “the identified TIR-catalyzed small molecules could be employed as general and natural immunostimulants to control crop diseases.” Jane Parker further remarks that “knowing the biochemical modes of action of these small molecules opens a whole new chapter on plant immunity signaling and disease management.”