Human environmental genome recovered in the absence of skeletal remains 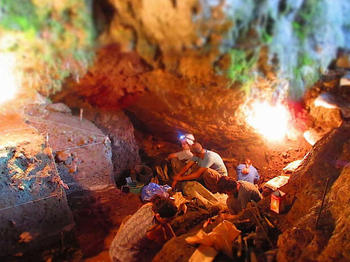 Overview of the excavation works of Satsurblia cave in 2017

Ancient sediments from caves have already proven to preserve DNA for thousands of years. The amount of recovered sequences from environmental sediments, however, is generally low, which difficults the analyses to be performed with these sequences. A study led by Ron Pinhasi and Pere Gelabert of the University of Vienna and published in Current Biology successfully retrieved three mammalian environmental genomes from a single soil sample of 25,000 years bp obtained from the cave of Satsurblia in the Caucasus (Georgia).

The cave of Satsurblia was inhabited by humans in different periods of the Paleolithic: Up to date a single human individual dated from 15,000 years ago has been sequenced from that site.  No other human remains have been discovered in the older layers of the cave.

The innovative approach used by the international team led by Prof. Ron Pinhasi and Pere Gelabert with Susanna Sawyer of the University of Vienna in collaboration with Pontus Skoglund and Anders Bergström of the Francis Crick Institute in London permits the identification of DNA in samples of environmental material, by applying extensive sequencing and huge data analysis resources. This technique has allowed the recovery of an environmental human genome from the BIII layer of the cave, which is dated before the Ice Age, about 25,000 years ago.

This new approach has evidenced the feasibility of recovering human environmental genomes in the absence of skeletal remains. The analysis of the genetic material has revealed that the SAT29 human environmental genome represents a human extinct lineage that  contributed to the present day West-Eurasian populations. To validate the results, the researchers compared the recovered genome with the genetic sequences obtained from bone remains of the nearby cave of Dzudzuana, obtaining definitive evidence  of genetic similarities. This fact validate the results and excludes the possibility of modern contamination of the samples.

Along with the identified human genome, other genomes such as wolf and bison have also been recovered from  the environmental samples. The sequences have been used to reconstruct the wolf and bison Caucasian population history and will help better understand the population dynamics of these species.

The team now plans to perform further analyses of soil samples from  the cave of Satsurbia with the objective of revealing interactions between extinct fauna and humans and the effect of climatic changes on mammalian populations. The ability to recover DNA from soil samples allows us the reconstruction of the evolution of whole past ecosystems .